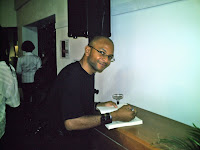 Every now and again when this blog started, we looked at what Robert Sandiford and Linda Deane were up to – be it separately or Arts Etc cashing in on Cricket World Cup with Shouts from the Outfield.

Now it seems like the Christian Science Monitor, they are going to switch to the Internet to carry their message across;-

After 25 issues and one year longer in circulation than planned, ArtsEtc: The Premier Cultural Guide to Barbados has come to the end of its print run. 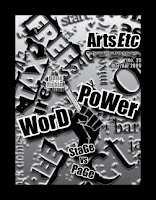 The bi-monthly newsletter, founded in March 2003 by award-winning writers Robert Edison Sandiford and Linda M. Deane, covered major aspects of arts, culture and society in Barbados and beyond. In the editorial of their farewell issue launched last week, Sandiford says, however, that it’s not a time for goodbyes, just the welcoming of a new five-year plan. The magazine will now become a web-based entity as the founders prepare to concentrate on publishing books, anthologies specifically.

He likened ArtsEtc‘s lifespan to that of certain TV shows. “Like, say, Seinfeld and other celebrated shows that have the good sense to know when their number is up, we at ArtsEtc have had our run. This is the last regular issue of the premier cultural guide to Barbados.”

Sandiford said he also believed ArtsEtc, like those shows, had been successful, helping “to democratize and, whenever possible, revolutionize our industry,” and, in so doing, had made a contribution to arts in Barbados.

In addition to frequent “state of the art” inquiries into various branches of the arts, ArtsEtc tackled issues affecting Barbadian society, and provided a showcase for the work of Barbadian artists and writers.

The newsletter continues to be well-received and eagerly anticipated. “We are constantly gratified to hear from people who ask for it by name, and when they don’t see it at their favourite bar or gallery want to know what’s happening with it. There are people who have collected every single issue,” says co-editor Deane. “We trust they, the contributors and the sponsors who have supported us so strongly over the past five years will follow us online at artsetcbarbados.com.”

Among those staunch supporters is the National Art Gallery Committee, the newsletter’s major funding partner from the inception and without whom ArtsEtc‘s editors acknowledge the publication would not have evolved.

The farewell edition, dubbed “The Word Power/Gone Fishin’ Issue,” is in black and white – in deliberate contrast to the boldly colourful first issue, though no less striking. It features thoughts on what drives artistic success, a debate of the written word vs the spoken word, and a souvenir calendar.

In 2007, Deane & Sandiford launched the imprint AE Books with the publication of Shouts from the Outfield: The ArtsEtc Cricket Anthology. The book was recently added to the cricket studies reading list at UWI, Cave Hill, and a study guide for secondary Schools and colleges has been formulated to go with it. The publishing duo is now in the process of following that up with an anthology of Barbadian literature.

I tried the link but it appears dead for now. So what about what’s in their last issue? A fair bit, the cartoon Skool Daze will be left in the air as the dudes hope to get their pants back…

There’s a cute adjunct to Skool Daze, where Esther Jones of BGIS reminisced on a student’s reaction to the Gale Theatre’s version of Macbeth with Alison Sealy Smith and Starcom’s Ayesha Gibson.

Short fiction from Philip Nanton’s Island Voices and “Dick” Stoute (not to be confused with Teen Talent) – Philip’s Heist is a robbery gone humourous while Dick’s mini-essay parallels a flea on the back of a dog at what it is to be in love with the land.

There’s five minutes with the underestimated Andre Hoyte; Caribbean Chapters’ Carol Pitt urging for readers reminded me of Alvin Cummins book-launch and the fact his next book “The Wind Also Listens” is a bit overdue – I was right about Carol’s treatise, it’s an edited version of her speech.

However I was shocked to learn spoken-word poetry began with Gil Scott Heron? That must be a relief for Jack Kerouac and Alan Ginsberg, eh? I recognise Heron, in fact when Belize was in near-chaos I used one of his poems’ titles in depicting the confusion… But to not accept there was a Beat Generation is ridiculous! That’s like teaching only African history at schools and not recognising any Europeans good or bad, oh – wait a minute! They do that already, oops! Watch for the pitchforks and torches headed my way, folks!