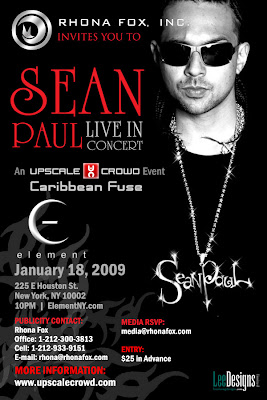 Dancehall superstar Sean Paul visits the Big Apple for the first time this year, on Sunday, January 18, for a very special celebration this Martin Luther King holiday weekend. New York City promoters Upscale Crowd Entertainment and Caribbean Fuse are both known for hosting trendy weekly parties for the Caribbean Diaspora and connoisseurs of the culture. This time they are teaming up to bring Tri-State fans the most popular dancehall artist today, as they present Sean Paul live in concert. The event is expected to be sold out, and will be held at the swanky lower Manhattan nightspot, Club Element.
Sean Paul has played an instrumental role in bringing Caribbean music to the forefront of the international music industry, and his string of awards include a Grammy for Best Reggae Album (Dutty Rock, 2004), multiple Billboard awards, as well as an American Music Award for Favorite Male Artist in 2006, beating out the likes of Kanye West.?
This cameo club appearance serves as the first of many for Sean Paul, who is about to launch his third major studio effort, The Next Thing, due out in the next few months from Atlantic/VP. Already with a new hit on Billboard – his collaboration with Estelle, “Come Over,” this is a rare chance for fans to see the star in such an intimate setting.
The night will be hosted by HOT-97’s Mr. Cee. Doors open at 10pm and the event will conclude at 4:30am. Advance tickets are now available for $25.