Twenty-eight teachers were just given tools to invigorate their students and smooth the transition from preschool to primary school at a handing over ceremony. 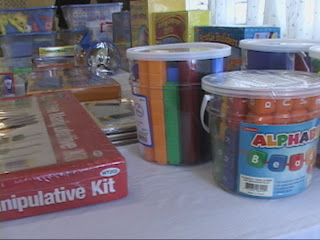 The transfer of materials was a follow-up to a Transition from Preschool to Primary School Workshop held April 28 to May 09, 2008. Mrs. Vanta Walters, Coordinator of Early Childhood Development, explained that the workshop formed part of a two-year project, with 50 percent of the kindergarten teachers being trained last year. The remaining 50 percent would go through the same process this year. She said the overall goal of the project is to facilitate the process of education reform and development, and consequently, to strengthen children?s foundation for learning.

She outlined that the specific objective is to establish an enabling environment that will facilitate the smooth transition of children from Preschool to Primary School in St. Kitts and Nevis, as such, maximizing the learning potential of these children.

The Early Childhood Coordinator revealed that the teachers were given training in all areas of the early childhood programme, such as the learning environment, the curriculum, teaching/learning materials and equipment, teaching methods and interactive and transition strategies.

She said they also had the opportunity to observe and teach a class as well as to learn how to produce learning materials from low cost and no cost material.

Chief Education Officer Mr. Patrick Welcome noted that there were certain challenges faced by the Ministry of Education, such as the statistic revealing that 20 percents of students refuse to sit their CXC examinations, as well as the fact that some students are unable to read as well as they should. He emphasized that the Transition Workshop was one of the means to tackle these challenges at the earliest possible point in the education system. As such, he said it was his Ministry?s view that it was necessary to train Kindergarten teachers in such a way that they are able to facilitate and enable the transition process, thus making a difference and generating future enthusiasm for learning in the Federation?s children.

Mr. Starret Green, locally-based Director of the Organisation of American States (OAS), acknowledged the project?s coordinator Ms. Jacqueline Morris and reaffirmed his organisation?s support for education which he described at the shaping and moulding of young lives. He said it was necessary to do so because these young children will emerge as the 21stCentury?s architects and builders.

The overall progragmme is being sponsored by the Organization of American States (OAS), United Nations Children?s Fund (UNICEF), the Early Childhood Development Unit (ECDU) and St Kitts’ Ministry of Education.