Is a slur a slur if anyone says it? Or if a CELEBRITY does it? Prince Harry is in bare Potter as Barbadians say!

Prince Harry just can’t stay away from the news, can he? Not so long ago, he was in Barbados for the Cricket World Cup, he also went to a costumed affair dressed as a Desert Nazi and sparked a global firestorm of condemnation… 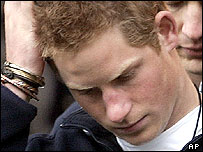 This time? He apparently has an affectionate nickname for a fellow officer from his military academy when he was learning to assault the Taliban (Goddamned ragheads, oops! But they’re the Western Hemisphere’s new villains, so that makes it ok, right? Read on…) in Kandahar, etc.

Now while it can seem it’s in poor taste, let’s turn it around a number of ways – if I was in the UK or NY and donned a Gestapo outfit and claimed I was Herr Flick from ‘Allo-Allo, would anyone have paid any mind? I don’t think so, while in Barbados I cannot even rob a bank and get away with it as everyone would say there’s the big white dude who used to read the News, over and away (Not that I see myself as big or white… But?that’s why I call the foreign blogs so – the famous Bajan expression: over and away) I would be a nobody, or, at worst? Just another WW2 ninny!
What about Prince Harry calling a fellow cadet “Paki“? On the surface this may seem awful, but using a Barbadian perspective, how is it that Starcom’s Brass Tacks allowed a caller to say “coolie” on the air, as in clearing debt with a member of the Bajan Hindustani community, while the delay switch was not even thought of, far less touched! Is it okay when a black Barbadian can scream “Red man!” when he tries to get the attention of a white Bajan? How would he feel if the caucasian hollered “Darkey” to get their attention? There can be a Small Black Businessmen’s Association and Black Entertainment Television, but try setting up the Ivory News Network or White People’s Merchants’ Co-Op and see how far you get? You’d see more torches and pitchforks than any monster would in Transylvania!
Interestingly enough, CNN has just released a story about a survey that discovered most people are more racial than they realise;-

The authors divided 120 non-black participants into the roles of “experiencers” and “forecasters.” The “experiencers” were placed in a room with a white person and a black person, who played out pre-arranged scenarios for the experiment. The scenarios began when the black role-player bumped the white role-player’s knee when leaving the room.

The “forecasters,” meanwhile, predicted how they would feel in these situations.

The magnitude of the results surprised even the authors, Kawakami said. Experiencers reported little distress in all three scenarios, much less than the forecasters did in the moderate and severe situations.

“Even using that most extreme comment didn’t lead people to be particularly upset,” said co-author Elizabeth Dunn, assistant professor of psychology at the University of British Columbia in Vancouver.

So in essence, if Harry was on Baxter’s Road and asked his fellow soldier a question using that form of address, I really doubt any Bajan would make a Federal case of it, and while that’s sad – it’s not unexpected… None of it – except the Costume bit – is right, but perhaps folk are just exaggerating the severity of the deed, not for the action but WHO is saying or doing the so-called unacceptable acts.

Was this why “Slumdog Millionaire“, set in India, earned so many Golden Globes? As a sympathy vote for Harry’s Asiatic slur, while Heath Ledger earned his posthumously for his work in the last Batman film – when it was possibly a subconscious sop for teasing Ledger over “Brokeback Mountain“? Whichever way you slice it… In Barbados, when a body is in deep trouble we say they are in bare Potter. So Prince Harry is in bare Potter, eh? Perhaps a term at multi-racial Hogwarts can help?