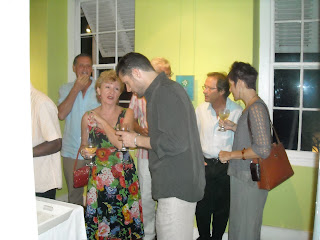 Was sad to see that no-one appeared to have any remarks for Dennis DeCaires’ art at the Lancaster Great House Gallery. I have since learned it’s not even the first time he’s appeared at the West Coast venue, thanks to Caribbean Beat;- 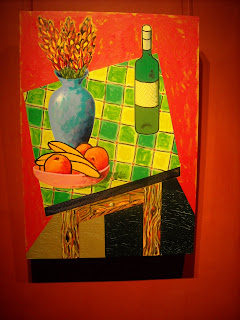 [Denis DeCaires] is also passionate about everyday things like mangoes, flowers, a cup, jug, glass, table, vase, chair. They are, in songwriter?s terms, his ?hooks?. In his work, they appear to hang in space, then remorselessly but gently pull you in, help you engage with the space of the painting. 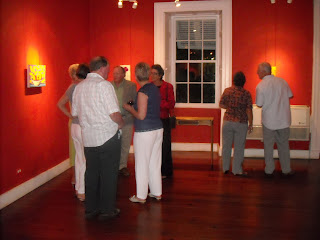 Just as interesting is the depth of colour with which he surrounds his objects and which he gives to them, as in Fiesta, where bananas and flowers are secondary to the ground they occupy. The result, according to one of his early art tutors, is ?like trumpets blaring?.

Here’s the man’s own words on how he arrives at the colour schemes he decides on;-

?As a young man I remember the Guyanese painter Frank Bowling making a great impression on me by stating that we were from the New World and that we could therefore approach colour in a new way . . . I think this relates to the lack of associations that colours carry here in the Caribbean as opposed, say, to a European context. 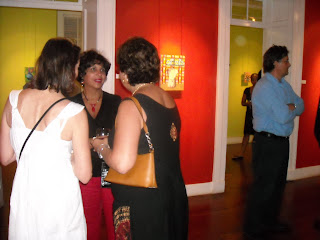 ?So because I am not weighed down with assumptions about colour I can use it as pure saturated pigment, as they do, for example, in India. I?ve used it in this way in the painting La Mesa.?

DeCaires’ canvasses seem casual, almost effortless, though in practice his work is laboured, cumulative, and multi-layered… 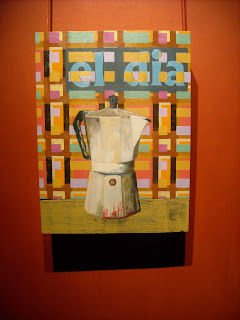 From about the early 90’s, Dennis has also made appearances at Zemicon, Queen’s Park Gallery and throughout the Caribbean as well, although he still maintains his UK ties. His latest exhibition is on until the end of January – take a look, won’t you?