The sticker being placed on the sides of the buses and taxis reads,” Ask me to take you to Prickly Bay Waterside.”

“These stickers were designed to give us a noticeable presence and to create a greater awareness about our properties. The idea is to invite Grenadians down to the property to have a look,” says Sales and Operations Manager Harrison Milborne.

?”We are one of the only new property developments to be in the final stages of completion, and we want to make people aware of the exquisite product that we have created at . We believe that advertising on the buses and taxis will create the kind of visibility and product recognition that we want, while supporting local businesses by giving additional revenue to the bus and taxi owners.“ 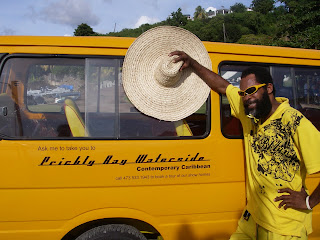 Hundreds of Grenadians and visitors have already visited the new Prickly Bay Waterside properties to patronize their restaurant, which boasts some of the best pizza in , and to have a look at the properties.

of the completed show homes can be arranged by calling 473-533-1943. The properties will be officially opened in February and some of the units have already been sold.