With the whole planet in an economic upheaval, it was just as well I banned KFC and Chefette, it has made me inventive on what I bring for lunch to work and now any outside eateries I may use are not necessarily limited but creative… I use Sheraton’s Food Court (Have to warn you, IV Play Deli is closed until 30th – annual vacation? Not sure), but I avoid Grillicious as their staff are surly now and not so before. Arabian Knights is Arabic in name only for the most part – Hummus you have to order in advance, and their other food – chicken chinks and potato wedges – is rather bland, like recycled plastic or paper! However, Pizza Man Doc has a nice Tuna Melt for $8.50 and made with their own freshly baked bread and small yet filling – perfect with Coke Zero (It tastes nice, not same as regular Coke but not ghastly like Diet Coke)!

As for NY Pizza in Quayside, they have pretty much sealed their own coffin in my books – passed there last night to get a Medium, rather than make dinner and it was 9:45 pm… See the door open, sign is still reading same way and I see three guys with a number of pizzas like a supervisor and staff collecting for their late shift crew. 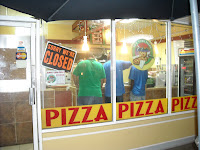 I get no further than my greeting only to be told “

I look at my watch which had not warped to another dimension, and then I ask what time they shut, then I am told it’s at 10:00 pm but even though I am there before closing, by the time they process my order, it’s beyond their hours. The supervisor-type customer then yells at them to help the man, since anyone could tell he tired and want some food; this was done in a brawling Trini accent.

The woman repeats they’re closed and starts turning off lights, I got cruel and decided to snap a pic – and she turns the sign as I snap…

On the better side I have heard from Kim Tudor of NISE and she has promised to run my letter in the next column of “Naughty or NISE“, but she agrees that both places have service that’s “

…just awful!” Her words, not mine! Ms Tudor explained they have to call both KFC and Chefette to hear their side, but she was glad to learn I e-mailed the same letter to both entities, but she was disappointed both made no reply to me.

Well, we shall see what happens in the dead-tree version of the Nation soon? “Colonel” out for now!