The Shaggy and Friends concert, held at the Jamaica House Lawn, raised funds for the Bustamante Hospital for Children through the Shaggy Make a Difference Foundation. All proceeds from ticket sales, sponsorship donations and auctioned items went to the the children’s hospital to finance new equipment.
David “Squeeze” Annakie, publisher of the upscale lifestyle publication JAMROCK magazine, flew to Jamaica specifically to support the Shaggy Make a Difference Foundation.
“The Bustamante Children Hospital was the first medical outlet for me and that was at the age of six years old,” noted Annakie. 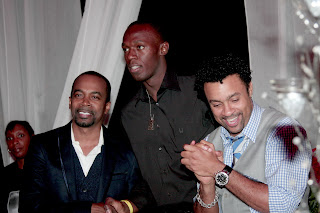 Auctioned prizes included Usain Bolt‘s sneakers and a trip around the track with the fastest man in the world, which were both auctioned and sold to Mr. Annakie, in the amount of J’ca $355,000. Mr. Annakie’s companies LinkUp Media Inc. and JAMROCK magazine was able to raise an additional $5000 US in 45 minutes from his clients through his radio program in New York.
“I made it kind of hard for them to say no, and they all know I would not take no for an answer,” he chuckled. “However, I would like to say thanks to Brad Bernstein, of The Law Offices of Spar & Bernstein, Scott Siskind of 1st Republic Mortgage Baners, Anthony Ferguson, of Realty Executive West, Dale Getfield, of People’s Choice Furniture, Esther Tobias, of Tobias Stoddard Realty, JM Hyundai, WVIP and all the other callers who contributed donations.”
The funds were turned over to Orville “Shaggy” Burrell at a meeting at his residence, which led to discussions as to how more support could be garnered from overseas in the future.
“Shaggy is not just an entertainer, philanthropist and businessman, but an angel for the children at the Bustamante Children Hospital,” explained Annakie. “I am willing to be his assistant and support at anytime and in any capacity to help save lives at this hospital.”
The Bustamante Children’s Hospital is not just the only pediatric hospital the English speaking Caribbean, but it is also the only pediatric hospital which offers specialized health services for children in Jamaica. Shaggy garnered support from Caribbean music industry to create a song title “Save a Life” and video, directed by Jay Will. Shaggy and friends came together for one night to fund raise for the much needed cause, successfully raising J’ca $27 Million for the children’s hospital.?