Took a look at GIS’ News site this morning and found this;-

Work is currently under way to ensure that all the island?s schools are secure. According to Education Minister, Ronald Jones, ?work is being carried out at a number of schools in need of fittings such as fences and security huts“. 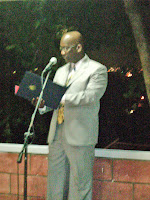 He explained that the work, which started this month, ?is part of a wider exercise to ensure that there is greater vigilance at our schools.? He however, pointed out that the initiative was not intended to ostracize persons who had legitimate business at the school. ?It is not to keep people out, most persons use school facilities for legitimate purposes and we want them to be able to do so in a safe environment,? he said.

Mr. Jones also stated that the improvement in security should augur well for the ?day to day? functions of school security guards, allowing them to operate with minimal discomfort.

The Minister revealed that further initiatives would be pursued to ensure the highest level of security at the island?s schools. ?We plan to introduce other security features at various schools that will be able to provide us with information about those persons who use the facilities; particularly those who use it in a negative way and contribute to vandalism of the school plant,? he pointed out.

What I’d like to know is, while the kids are kept safe from outside forces – what happens to ensuring teachers are not psychoes of a beating nature? I know of a thorny situation where a so-called educator at a Primary school stated openly she has it in for all of her “pretty” students! What does that have to do with learning or teaching?
The woman beat a whole class of 6/7 year olds with four rulers strapped together on their forearms because one child talked and none of them identified the culprit! The principal has received numerous complaints, what will it take for him to act? Postal or Ballistic??
Years ago at another Primary school, when a male teacher did something like that to a boy of 8, the father made sure from various sources his son was not covering guilt and he went to the school with a pipe loaded with concrete… The brutalising man had to drive out of there in a HURRY!
There needs to be a some kind of psyhcological sorting test to verify if a person has the right temperament to teach, apart from adequate skills – and it needs to be re-done throughout the teachers’ career as you never know what situation may turn an educators’ head from going good to worse! Perhaps potential parents should go under a similar microscope?