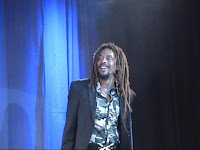 David Kirton retained the honor of being called ‘Reggae Artist of the?Year‘ at the Barbados Music Awards 2009. The evenings Divas including?Grammy and Golden Globe winner Regina Belle and Soca Queen Alison Hinds?held the spot light, but, when the Reggae category was announced? Then out?came the Green Camouflage! Kirton was awarded the BMA by his peers?based on the success of his currant album Time for Change, released by?Barbadian Record label Bird’s Eye Music and distributed by Universal?Music in Canada and Right Recordings in the UK.?
Kirton set a brisk?pace with this album. He is quick to say that this album was all about?evolving his sound, position and scope, working with noted producers?Chris Allman, Van Gibbs and De Red Boyz to capture and realize the?final 11 track selected. National College Campus Radio Review Canada?stated ‘Kirton has written songs with intelligent and grabbing lyrics?that listeners can relate to on many levels.
‘He then wraps them in?some serious booty-shakin’ rhythms, and a shimmy of urban flavor that?would be at home in any dance club.’ The UK’s Sunday Mercury wrote?’the new album from Barbadian balladeer Kirton has the crossover?appeal to break him big in the mainstream pop charts.’ The Mercury?went on to compare Kirton’s style to Michael Jackson, Craig David, and?UB40.
Three music videos, each one unique and individual all help?Kirton’s cause. They exposed his fans to Kirton’s home land, Barbados,?in his Time for Change video directed by Sundance and Pulitzer winner?Tom Kruger, gathered celebrities and artists together for the highly?creative Free to Fly that charted at #6 on the MTV Much Music Top 10?and did not leave out the Caribbean beauties in BMA Best video &?Reggae song of year 08, Green Camouflage. 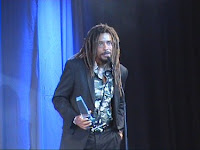 The eclectic mix he?assembles not only applies to his sound that has been described as a?hybrid of pop – rock and reggae but venues with 2008 seeing?performance at The Royal Chelsea Flower Show, Virgin Atlantic Music?Festival, Fashion has no Borders, Toronto and The Midem World Travel?Market, London. Kirton seems to be right on target with his plans for?2009, all ready in pre production of his fourth album which is slated?for release in fall and tours confirmed for Costa Rica in February and?the United States in March it may be that David Kirton‘s Time For?Change is now.