Red Carpet Premiere of Hugh Jackman’s “Australia” at Olympus Theatres – Your chance to be hounded by Papparazzi at VIP Event – TONIGHT: SHAMELESS PLUG

The Olympus VIP Theatre wants you to join them as a patron for a night of fun and excitement as they debut this evening the first in a series of Red Carpet events to promote high end entertainment and at the same time develop a database listing of the island?s most sought after professionals.

Name and address will be recorded and your photo taken as you grace their red carpet of The Olympus Theatre VIP and watch Nicole Kidman lock lips with Hugh Jackman during WW II in “Australia” for a mere sixty-five bucks for tonight. 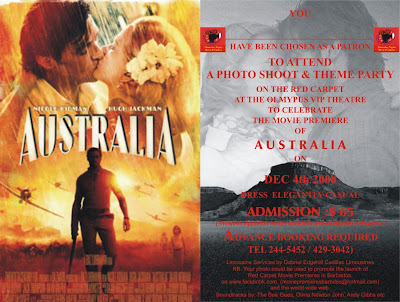 According to a release from Olympus, the database will allow them to have a list of contacts to invite to a number of events to be announced shortly.

To all interested in helping the Variety Club in their mission to support the children of Barbados and the Eastern Caribbean, especially those who are sick, physically or mentally challenged, through the improvement of the care given to them and the quality of their lives in general.

Please come and enjoy our wine & cheese social and movie night and bring a friend!

We are very grateful for your support. Movie: The Secret Life Of Bees