This time of year, as cultural performers weave various influences into a colourful patchwork of music, dance and flamboyance, the publication of a music volume has recognized the cultural heritage of St Kitts.Archivist Mrs. Victoria Borg-O’Flaherty said the inclusion of the music of St. Kitts and Nevis in a four volume series entitled ?Music in Latin America and the Caribbean? is important because the authentic rhythm, sound and lyrics of the Federation are now documented and recognized as part of the Caribbean culture.

She added that the Federation?s inclusion in Volume two of the series, demonstrates that the authentic music of the twin islands is no longer marginalized, but recognized with that of larger territories like Jamaica and Trinidad and Tobago.

The Archivist explained that the music of the Federation is documented in a sizable chapter of its own, complete with photographs and lyrics. The volume was compiled by Professor Malena Kuss of the University of North Texas, Denton while the actual article on St. Kitts and Nevis was originally done by Jacqueline Armony and the late Joan Robinson with input by Larry Armony and Creighton Pencheon.Mrs. O?Flaherty outlined that Ms. Armony and Ms. Richardson conducted interviews in St. Kitts and Nevis respectively with musicians and culturalists such as Pamela Wall, Edgar Bridgewater, David Freeman, Ken Martin and Lloyd Mattheson. She said that her son Fidel O?Flaherty and herself also contributed. 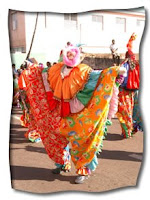 The volume covers popular music of St. Kitts and Nevis, ranging from church music and brass bands to steel bands and big drum. The church music includes the performance of the Moravian Band which performed in the celebrations following World War I, while the ?big drum? is featured because of its presence in much of the music of the cultural troupes, such as the ?Bull? and the ?Clown?. The photographs are of Christmas and Carnival performances and band pictures such as the Honey Bees String Band.

Archivist O?Flaherty said that the chapter also explores the different influences of the French, British and Africa which are seen in the methods of playing instruments as well as the dance moves. There is also mention of the performances of Samuel Augustus Mathews, in the 18th Century when he sang his own compositions, sometimes using the language of the slaves. As such the volume covers a significant amount of information about the cultural heritage of St. Kitts and Nevis.

Much of the folk music which was analyzed, was recorded by Allan Lomax in the late 1950s and early 1960s when he traversed the Caribbean documenting the music heritage of the islands.

Mrs. O?Flaherty informed that copies are available for listening at the National Archives and the St. Christopher Heritage Society.

Interestingly enough, the chapter itself has a wider reach. The written descriptions were found interesting and mentally stimulating enough, that it was decided to create an exhibition in Texas on certain countries in the music volume. Naturally, St. Kitts and Nevis was chosen.

As such, Professor Kuss is working directly with Dance Specialist Lorna ?Ava? Henry of the St. Kitts Department of Culture, who has already begun sending cultural music instruments to Texas. Ms. Henry said that local folklore costumes, which will also form part of the exhibit, are presently being crafted locally.

Mrs. O?Flaherty enthused that the museum exhibit will advertise the Federation and enhance the tourism product, displaying a cultural authenticity that belongs to St. Kitts and Nevis alone. She said it shows that the twin-islands have something different to offer. The Archivist noted that persons who read the book and visit the museum will want to come and see the actual performances.

?We need to make sure [the performers] are looked after,? Mrs. O?Flaherty emphasized. ?That they can perform and that their performances are as authentic as possible.? She noted that introducing too many outside influences will dilute the authentic cultural offerings, so it is important to encourage local performers to keep their presentations as true to the original as possible.