Portrait of the Island as a young Artist

L.D. Lucy lives on the of , a gem of the Caribbean in the Grenadines island chain and ? nearest neighbour. She was born in the ?within hearing distance of the ocean? and enjoyed a childhood rich with the bright and often bizarre imagery of a lively 1950’s seaside resort. As an adult Lucy moved to where she began painting in the 1980’s.

Though she is self-taught her career as an artist had a successful beginning with work exhibited notably at the Olympic Arts Festival 88, and the International Gallery, . Work then in the performing arts as a Jazz Festival?s artistic director and CEO left little, then no time for painting. Though, as Lucy says, it was an amazing experience to direct a performance piece of such a magnitude ?I was too many years living 600 miles from the nearest beach and always felt the ocean tugging at my heart.?

On holiday on Bequia at that time she felt, as do so many island travelers, what she describes as a wave of peace and homecoming and knew that the island would be part of her future. In 1996 she realized the dream to relocate there and devote time to her visual artwork. Home now is an old-style West Indian house overlooking a , shared with husband fellow artist and model-boat builder Kingsley “Prop” King. 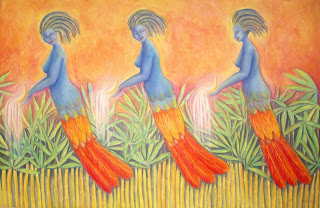 L.D. Lucy?s dream-like paintings have been described as ? …how the Fates might look if painted with Bequia as a backdrop.? She paints, with a brilliant tropical palette, of island life ? the season?s harvests, boats at sunrise, patterns of islands, starlight and the sea. With this backdrop she paints to portray the timeless soul or spirit that underlies island life and we see Mother Nature?s various faces in her work. We see humorous elements too of theatre and circus from the performing arts and other long-ago seasides. Viewers often ask Lucy to tell the stories behind the works and their meanings but she declines.

“It is my intention,” she says, ?to evoke a sense of mystery and, by not explaining, to encourage each viewer to respond with her or his own feelings and ideas, to leave the logical and take a step into dreamtime, perhaps. I regard a work as successful when feelings of the mysterious persist, and someone smiles.?

Dreamtime portrayed by the Artist as an Island [until Dec31st] – OR; In her own dialect

This exhibition at the Speightstown branch of the Gallery of Caribbean Art, the first showing of my work on , features a body of work done mostly over the past 18 months. Though the work can be loosely seen as comprising 4 main series, each piece is a step on a journey on which technique develops and imagery evolves.

Regarding technique, I have over time been un-cluttering my paint palette as I explore how light is created in my art. I finally took this to its limit and the newer works in this collection were painted by applying layers of only 3 primary colours.

This can be seen especially in the ?..Sweeter, Sweetest? a series of mango paintings. At the other extreme the series of mixed media works All Dress Up Nice Nice began with clutter as I set about creating artworks with the contents of my pockets after beach-combing walks. These soon became the head-dresses that are a characteristic of my work.

As my images evolve it is often an individual symbol that unites a series of work. The single orange feather in Katy?s Song for example (the feather itself evolved from a single orange fish) gave rise to paintings of ladies with parrot tails and feather fans then finally their full feathered costumes of the Joyful hummingbirds. The landscape over which these birds flew became the setting for the next series of smaller and curious paintings The Journey (curious in that, working without any sketches, I was able to let each painting ?take me where it wished?). 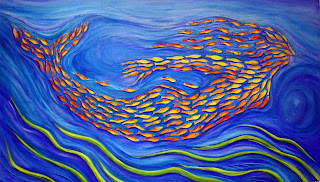 When this journey?s path returned to the ocean another circle began as I explored the ancient myths of the sea-god Poseidon. Here are his wife Amphitrite and their sons the first merman Triton; here is Poseidon?s ?special friend? the goddess of corn and harvests. Here is the blue-haired god himself, now half a world away from his Mediterranean history, stepping from the sea onto a distinctly Bequia beach. His symbols too are from our islands ? harpoons in his hair, a necklace of boat-builder?s tools.

Likewise the familiar symbols in my other works make them all, in a way, views of our Caribbean island life; on an average day I might see ten islands, a hummingbird nest, whaleboats, a flock of egrets, blue fish, orange blossom, sea eggs and the moon ? and all before breakfast! 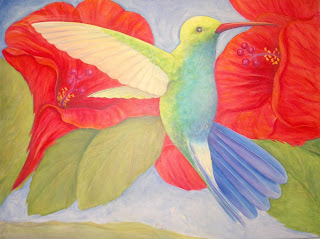 But is there more to it than it appears to be? Something mysterious? That is for you the viewer to decide. {NB – This show in St Peter runs until 31 December 2008}