I got this e-mail over an issue I have seen at Barbados Underground as well, now what is expressed in the following letter may not please many factions, and in fact Ms Davis’ views expressed here may not coincide with personal policies of this News-Blog, but she too has a right to air her concerns (some minor edits have been performed for the safety of all involved) –

For your interest. To date the attached letter has not been published by either of the local papers. 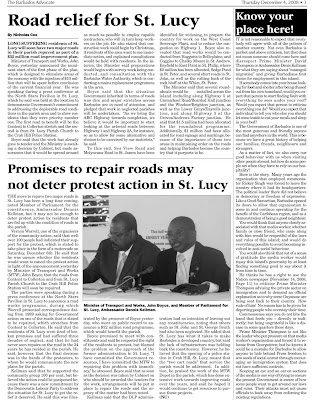 I am responding to an anonymous letter appearing on page three of the December 4th Advocate newspaper and captioned on the cover page ?Know your place here, Rickey Singh!?

I am curious why the Advocate would give such visibility to an anonymous article seeking to silence a prominent journalist.

The question that comes to mind is this – what racial, residential or political qualifications are required for any person to have a legitimate place?

The title of the article suggests that Mr. Singh is out of place here in Barbados

I would like to remind this author without a name, that Mr. Singh is a CARICOM national, honored with a doctorate for his outstanding contributions as a journalist, a past President of the Caribbean Association of Media Workers, a former editor of Caribbean Contact as well as the author of a weekly column at the Nation newspaper for twenty-four years.

Mr. Singh does not need my defense nor do I have a personal relationship with him. I know him because of his published words.

The writer without a name should be well aware that the Caribbean has been pursuing a regional integration project since 1973, and there is every reason why CARICOM nationals can legitimately voice their opinions and raise issues in any Caribbean country.

In addition, the writer goes on, ?out of a sense of gratitude the media worker would repay this island?s generosity by finding something good to say about it.? But some would ask where was the Barbados governments? generosity in 1983 when Mr Singh’s work permit was withdrawn at the same time he dared to speak out against the Grenada invasion?

The writer without a name goes on to ask if Mr. Singh thinks he has a right to ?use the Nation newspaper to criticize? the current administration and warns that you ?do not bite the hand that feeds you?.

The writer ends by saying that attacks on the Government ?must not cause officials to back away from enforcing the existing regulations.? If so, the reverse is equally true. Attacks like this anonymous one, should not cause journalists to put down their pens, singers to silence their voices or artists to stop reflecting on our lived realities.

I know Mr. Singh?s place. He is not ?hiding behind Press freedom to sow the seeds of social unrest? as the author without a name has hidden behind a safe veil of anonymity. To the contrary, Mr. Singh owns his points of views and has refused to be silenced by the fear or the harsh reality of being put ?out of place? by anyone.