Confessions of a Superhero: Can a hero sandwich Real Life with Reel Life? [ATTN: SPOILERS]

I got this DVD free thanks to a contest from web-comic site Komikwerks, and I always intended to review it once I got my grubby paws on it, so here goes… Could be an idea to stuff a stocking or under the tree for those who observe Christmas out there?

Morgan Spurlock is probably best known for his sideways glance at fast-food giants in acid-coloured glasses; “Super-Size Me” of four years ago – where he deliberately eats whopping huge burgers and milkshakes for a month with no exercise and you get to see how apart from weight issues how he has mood swings, allegedly attributed to the diet and creating a few lawsuits along the way. Then, in 2006, he makes an effort to get into the world of comedy/drama on the matter of teaching in the USA, this film is known as “Chalk.” 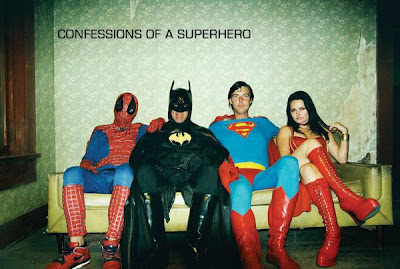 This time around, as an executive producer, Spurlock takes a heartfelt look at what happens when some ppl don’t get to have their hands or feet immortalised in concrete outside of Grauman’s Chinese Theatre, but instead haunt the outskirts hoping for spare change until that Big Break comes along… This is where “Confessions of a Superhero” finds four hapless souls – they came, dreaming to be stars – never feeling they’d end up living nightmares as sexless prostitutes. Characters hoping to entice tourists to pose for pictures with them and earning tips instead of a salary. All told through clever use of stunning photography stills mixed with emotive story-telling letting the circumstances speak for themselves via the film and its interviews, and allowing the viewer to decide rather than be told what is where… Homeless Hulk/Joseph McQueen – native of South Carolina, after selling a video game to buy a bus ticket for Hollywood, now reduced to celebrating earning a part as a villain’s sidekick in a film that few will see and less will remember; venerating where he slept in an alley-way and yet in a quest for the almighty dollar blacks out in 130 degree heat in his sweltering costume under any conditions…

Batman/Maxwell Allen (ersatz George Clooney clone …. George Cloney?) – more of a joke than a hero (perpetually cackling like his hero’s main nemesis), a villain in his own mind? He claims to have Steven Segal-like capabilities yet when in in a real martial arts class his inadequacies are magnified to a humiliating extent; angry at no tips one day he finally gets the fame he wants but not in the way he expected by getting arrested after a dispute with a Union picketer, then reduced to security work hoping to get recognised to audition a role… Goes to a comic-book convention to find a new Bat-Mask, ends up having some quasi-softporn woman sitting on his lap as the highlight of his day.

Wonder Woman/Jennifer Gehrt – she leaves a small town in Tennessee from a father who’s a preacher only to attend a Baptist church in Hollywood with her soon-to-be estranged husband; wanting to be accepted for serious roles and earning only bimbo parts she keeps the wolf from the door posing as the mighty Amazon for cheap Asians while in the background Hispanic hot-dog vendors drool over her…

You can see her whirlwind marriage was doomed even as it started, yet she ignored it for whatever stars it played before her mind’s eye.

Superman/Christopher Dennis – the most noble yet most tragic of them all… Is he really the son of Sandy Dennis? He says yes, but her family is unsure. Chris’ fixation on Kal-El: Last Son Of Krypton is more than obsession it is tunnel-vision as opposed to Heat rays or X-ray vision.

He is the real story of this documentary that is a real life drama, eventually falling for a psychology student who observes him, he uses his tips to make his tiny dwelling a Fortress of Devotion to all that is Superman.

That devotion earns him nothing but a large collection of memorabilia and you see the pain on Chris’ face when he does not even place in a Superman look-alike contest in Metropolis, Illinois. These are but a few of the many intriguing characters who butt and abound the world-famous Grauman’s Chinese Theatre, all hoping the begging they do is merely a sideline to the big ticket for Glory and not a permanent “job” in obscurity – after all as Stan Lee says in the same flick… How can you be famous if you’re wearing a mask?