Bloggers-In-Arms: Where Blogging brethren (& sistren) are at right about now – plus one discussion forum

For those of you who want something different to read or discuss on Caribbean blogs, let’s take a look today at folks other than the usual suspects who typically run this little rock’s blogosphere ragged with their speculations – right/ wrong/ indifferent… 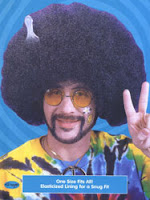 After a LONG hiatus – “Is anybody out there?” has returned with a vengeance! In her trigger hairs Bim has lined up Nation columnist BC Pires as well as the beatification of certain Bajan politicians –

…[PHOTOS OF] Mr. T on a jet ski, Mr. T at a crop over fete, Mr. T rally racing… and I came to the conclusion that with a man so hippity hop, the orb surrounding his head could only be one thing- an Afro puff.

{NB; Mr T not as in Grynner’s calypso on the late PM of Barbados, J.M.G.M “Tom” Adams, but the current PM, David Thompson}

Jdid, a Baje in Maple-Leaf territory, is studying the parliamentary crisis in Canuckville right now, but just like his famous Detergent Math entry he has equalled it with a review of plastic disposable cups!

How hard can it be for us as a people to have a standard cup size when someone is buying a drink? I not even looking for a worldwide standard I mean cause I know that in a US large is XX-large in Canada and a bucket in the West Indies and that a Bucket in New York is a large wash tub size in Barbados. No, I not even looking for standards to be world wide but what about even city wide? Ya mean that is impossible? Cuhdear man!

I laughed ’til snot flew out of my nose with this item, just below the Canadian border there’s the US of A, and Sean Boyce Johnson is blogging his quest to be a successful actor (It’s also a clever vehicle to promote his gig too) and his most recent article is a video and some pix of a play where he portrays a guy who seeks fame by standing on one leg for the longest time… Anything for 15 minutes, huh? Seems like a great comedy/commentary on sponsorship.

How about an American in Grenada? Pisces In Purple used to be Letters from Grenada, now Maria Santiago has a baby boy and does stuff like review colourful patterns of cloth in this part of the world –

The Grenadian sun literally bleaches everything it hits, so it surprises me not at all that she?s amusing herself these days by recovering all the cushions for the chairs that live on our verandah. She?s done two sets ? one in yellow pleather and the other in what I like to call ?toucan supreme?…

My headbands ?> I love these things so much. Without them I think I?d have cut my hair boy-short by now. I?m fully aware of how loud they are, yes, but I love them still. I swear I only wear the neutral (black & white) ones when I?m back in the States. Frankly, I don?t need them in New York; the weather is different. The headbands really keep the sun from both my hair and my face. One of them was even specially made for the election? It?s supposed to be yellow, though I realize now it truly is orange.

Got news for you Ms Santiago, in the tropics? The Sun does bleach EB’BA-T’ING (everything)! Then if music is a medicine, Karen is ya Nurse… Back in Canada, this Caribbean descended blogger likes to track anything Soca. She even breaks stories not found in Vibe or Source, like how Ludacris invited talent from the BVI to assist in his newest disk –

…Tortolan soca artiste and producer Kamau has a considerable amount of clout in Hip-Hop circles. Now he can add a new credit to his resume with the release of Ludacris’ new album, Theatre of the Mind. (in stores now) 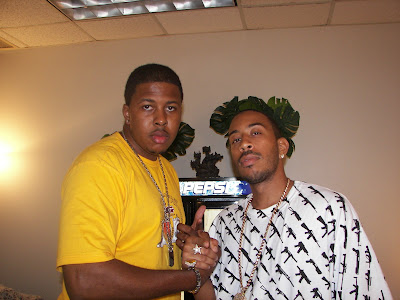 Calling up the Homies” alongside Clinton Sparks. After Luda laid down the vocals, Kamau took care of the mix. If you listen carefully, you can catch Kamau singing in the background. Kamau is a musical genius! He used his own voice to help recreate the vibe of an original track without the use of samples.

And if you’re in the mood for a Christmas contest, hop over to Barbadian discussion forum, The Trident, where you get a chance to win a $100 Gift Voucher from Cave Shepherd! Here are the rules and regulations (oh, you have to register and be a member – no lurking like other Bajan fora) –

As many as five topics per person can be entered for the competition.

1. If there is a tie, a tie breaker will be issued.

2. All topics of this nature (competing in the competition) will be restricted to “The Apex of Thought” forum.

3. The topics can not be in the form of a game eg a “What are you ….” game or “Talk to the person above or below you” game etc. If you are unclear of the type of topic you are looking to post, let us know.

4. Post whoring is absolutely forbidden and a bonus of 25 posts will be given to topics with significance to Barbados or the goings on in Barbados.

5. All topics for the competition must have “TXC“ in the Topic Description so we know you are participating.

6. Duplicated topics are not eligible.

Get cracking on those topics guys.

Good Luck! God willing we may have a second prize as well. Keep looking at this first post for more information