Surfing the net not so long ago, discovered this bit of the price of progress in Barbados? A Canadian medical researcher was stunned to learn that 20% or one-fifth of Barbados suffers from or is affected by Asthma. It did appear odd to me as well, from the point of view that when I was a child, it was not as prevalent. In my media sojourn days I know of a former colleague who was athletic in spite of it, as well as a reporter and a videographer whose wives were claimed by the extreme form of this breathing challenge – even at my present job there are colleagues who enbdure varying degrees of asthma and their children have it too.

Anyhow, according to the BBC; Dr Noe Zamel, from the University of Toronto, first examined another group of islanders before deciding to test here – he passed at the southern Atlantic isle of Tristan De Cunha which had a cataclysmic eruption with its volcano 37 years ago; but while this may have played a part in claiming about 50% of its residents, nevertheless it was right here in Barbados which led to a differing branch of research –

Barbados has so many people suffering from asthma that part of the A&E ward in the Queen Elizabeth Hospital in Bridgetown is dedicated entirely for patients coming in with asthma attacks.

Dr Harold Watson who runs this asthma bay explains the degree of the problem. 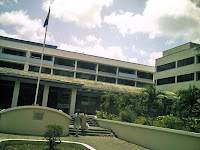 “In a typical busy day we can see 30 asthma patients per eight hour shift passing through.”

There’s another thought as to the mystery of why Barbados’ breathing patterns have changed over the decades, a Johns Hopkins analyst believes it stems from the fact that Barbadians have “advanced” so rapidly and created their own problems –

Associate Professor Kathleen Barnes, of Johns Hopkins University, has been investigating why the island has become so allergic in recent years.

“Barbados really is a microcosm of what’s happening globally, it’s gone through a very rapid period of change over a very short period of time,” she said.

Over the past 20 years, Professor Barnes and her team have analysed the homes on the island in minute detail, collecting dust samples, and monitoring allergen levels.

Professor Barnes’ results are enlightening. “We believe that in the modern home there are a variety of factors that contribute to this exposure.

“Indoor carpeting, better upholstered furniture and so on. All of these things combined contributed to these higher levels of allergen.”

…we are changing our environment so rapidly that our bodies simply can not keep pace.

Dr Barnes goes on to explain: “Allergies are the price we pay for our modernization over time. 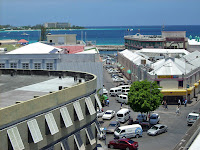 “This convergence if you will of various environmental factors, rapid changes in the domestic environment, changes in lifestyle due to rapid modernisation – all of the cars on the streets and the pollution that comes from these cars.

“It’s sort of this perfect storm if you will.”

Many of us are living the dream, the Western lifestyle. However, with more than 300 million asthmatics worldwide, and a third of all adults in the UK affected by allergy, perhaps this dream is at the cost of our own health.