Don’t know what you got Christmas day, hope it wasn’t coal, LOL… But here’s a gift list every Barbadian listens to every year;-

Santa baby, just slip a sable under the tree, for me
Been an awful good girl
Santa baby, so hurry down the chimney tonight

Santa baby, a ’54 convertible too, light blue
I’ll wait up for you dear Santa baby, so hurry down the chimney tonight

Think of all the fun I’ve missed
Think of all the fellas that I haven’t kissed
Next year I could be just as good
If you’d check off my Christmas list
Boo doo bee doo Santa baby, I wanna yacht and really that’s
Not a lot
Been an angel all year
Santa baby, so hurry down the chimney tonight

Santa honey, one thing I really do need, the deed
To a platinum mine
Santa baby, so hurry down the chimney tonight

Santa cutie and fill my stocking with a duplex, and checks
Sign your ‘X’ on the line
Santa cutie, and hurry down the chimney tonight

Come and trim my Christmas tree
With some decorations bought at Tiffany
I really do believe in you
Let’s see if you believe in me
Boo doo bee doo Santa baby, forgot to mention one little thing, a ring
I don’t mean on a phone
Santa baby, so hurry down the chimney tonight
Hurry down the chimney tonight
Hurry … tonight
Well the original purrer of those words is no longer with us – Eartha Kitt, who put the MEOW in Catwoman has died from complications due to colon cancer at the age of 81 – CNN has been following it….

Kitt, 81, died in New York, where she was being treated for colon cancer, Freedman said. Her daughter, Kitt Shapiro, was by her side.

She was performing almost until the end, taping a PBS special six weeks ago in Chicago, Illinois. The show is set to air in February.

Kitt was well known for her distinctive voice and made a name for herself in her portrayal of Catwoman in the television series “Batman.” That role produced Kitt’s recognizable sultry cat growl.

This is what the BBC had to say;-

Kitt was blacklisted in the US in the late 1960s after speaking out against the Vietnam War at a White House function.

She also caused controversy when she toured apartheid South Africa in 1974, arguing that she had helped wean the regime by raising awareness of racism.

However, she returned triumphantly to New York’s Broadway in a 1978 production, Timbuktu!, and continued to perform regularly in theatre shows and concert halls.

From the 1980s onwards she appeared in numerous films, and her 1984 hit “Where Is My Man” found her another generation of night club fans.

Kitt was born in North, S.C., and her road to fame was the stuff of storybooks. In her autobiography, she wrote that her mother was black and Cherokee while her father was white, and she was left to live with relatives after her mother’s new husband objected to taking in a mixed-race girl.

An aunt eventually brought her to live in New York, where she attended the High School of Performing Arts, later dropping out to take various odd jobs.

By chance, she dropped by an audition for the dance group run by Dunham, a pioneering African-American dancer. In 1946, Kitt was one of the Sans-Souci Singers in Dunham’s Broadway production “Bal Negre.”

Kitt’s travels with the Dunham troupe landed her a gig in a Paris nightclub in the early 1950s. Kitt was spotted by Welles, who cast her in his Paris stage production of “Faust.”

That led to a role in “New Faces of 1952,” which featured such other stars-to-be as Carol Lawrence, Paul Lynde and, as a writer, Mel Brooks.

While traveling the world as a dancer and singer in the 1950s, Kitt learned to perform in nearly a dozen languages and, over time, added songs in French, Spanish and even Turkish to her repertoire.

“Usku Dara,” a song Kitt said was taught to her by the wife of a Turkish admiral, was one of her first hits, though Kitt says her record company feared it too remote for American audiences to appreciate.

Song titles such as “I Want to be Evil” and “Just an Old Fashioned Girl” seem to reflect the paradoxes in Kitt’s private life.

Over the years, Kitt had liaisons with wealthy men, including Revlon founder Charles Revson, who showered her with lavish gifts.

In 1960, she married Bill McDonald but divorced him after the birth of their daughter, Kitt.

While on stage, she was daringly sexy and always flirtatious. Offstage, however, Kitt described herself as shy and almost reclusive, remnants of feeling unwanted and unloved as a child. She referred to herself as “that little urchin cotton-picker from the South, Eartha Mae.”

For years, Kitt was unsure of her birthplace or birth date. In 1997, a group of students at historically black Benedict College in Columbia, S.C., located her birth certificate, which verified her birth date as January 17, 1927. Kitt had previously celebrated on January 26.

That was a sad aspect of Christmas, but CNN says over in Maryland a family of four is very grateful to blogging making their season a joyous occasion;-

“This is our Christmas story,” said Ebony Sampson. “It’s going to be told for generations and generations to come.“

Sampson, who lives in Aberdeen, Maryland, with her husband, Daniel, and their two young children, has overcome more hardship than one person should ever have to face. When she was in the 10th grade, she lost her entire family in a horrific car accident. Raised by a grandmother in New York, Ebony eventually used some life-insurance money from her parents’ death to buy the home in Aberdeen, near where she grew up.

But in June, Daniel got sick. After several tests, his doctors concluded that he was suffering from salmonella after eating a tainted tomato. As a new employee of Bank of America, he had not accrued enough paid time off to keep his job as a credit-card account manager.

This led to massive debt for medical bills, which waylaid mortgage payments and eventually led Ebony to call other friends for advice and sympathy, and this led to the Sampsons’ salvation…. 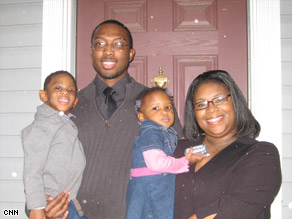 With no job, no car and no income, the Sampsons got another surprise: Ebony Sampson learned she was eight weeks pregnant.

The Sampsons returned home from church, where they are practicing ministers, on a Sunday in November to find a stranger knocking on their front door. He wanted to put a bid in on their house. Ebony told him their home was not for sale. The next day, the Sampsons were notified that they were facing foreclosure unless they could come up with $10,000 in the next two weeks to bring their mortgage up to date.

“Once we received that letter, it was like, ‘Oh my God, what are we going to do?‘ ” Daniel Sampson said. “I don’t think anyone in their right mind would receive a foreclosure notice and not be rattled by it.”

Somehow, the couple maintained their sense of humor. Ebony Sampson called one of her oldest friends, Jaki Grier, and jokingly asked her if she had $10,000. Jaki told her, “Sure, just let me open up my invisible purse!”

But then Grier got an idea.

A self-described geek, Grier started blogging years ago. Since then, she’s contributed to a magazine’s Web site and regularly posts thoughts and life happenings on her LiveJournal page. So, she published Ebony and Daniel’s story, along with a link where people could make a donation.

At the most, Jaki thought she could raise enough money to help the Sampsons pay a security deposit on an apartment after their home was auctioned.

But donations started pouring in. Within 24 hours, Grier’s blog had raised $1,000, far exceeding her expectations. People started linking to Grier’s blog from sites across the Internet and around the country.

Attorneys posted legal advice. Others in similar situations offered sympathy. One woman sent a donation with a note that said she had just lost her own home but wanted to help anyway. Another woman wrote that she didn’t have a car but would walk to her grocery store with a jar of change and donate it to the cause.

Yet another e-mail came from a woman who was unemployed, with no job prospects. She donated a dollar.

With every donation, the total raised ticked higher and higher on Grier’s blog. 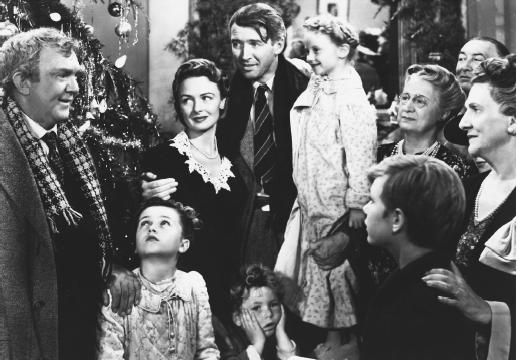 Eventually, they tallied a little over what was needed to keep the wolf from the door, for me, it seemed like a modern-day version of the conclusion of “It’s a Wonderful Life” when all of the townsfolk came forward to help George.