Where in Barbados are pictures Werth a thousand words or more? Lancaster Great House on the Barbadian West Coast

When I first came to Barbados the popular notion was the South Coast is for visitors with minor budgets and the West Coast is for tourists who have deep pockets. This image has blurred more and more over the years when you see semi-private condo developments at Harts Gap and Margate Gardens rivalling their western counterparts, or when you have upscale establishments like the Crane in St Philip for hospitality or distinguished eateries like Champers and Aqua who hold sway in Christ Church long before you get anywhere near the airport!

Not to be outdone, Lancaster Great House also has followed the trend where the coastlines merge – their latest exhibition now on is “South Meets West” a joint expression from BCC’s Adam Werth and Ras Akyem, the show started on Friday and continues to December 6th. Adam lays dominion over one segment with pen and ink expressions as well as wire/mesh sculptings while Akyem successfully dominates his turf with huge paintings and equally larger-than-life recycled sculptures.

I asked Adam if Pointillism is part of his inspiration for his pen and ink efforts but he was very careful to refute and even dispute that, for his part, he sees his own works in this manner – 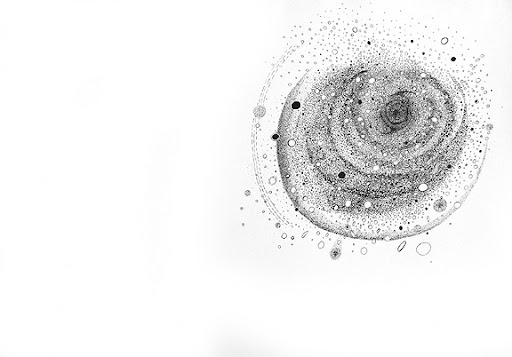 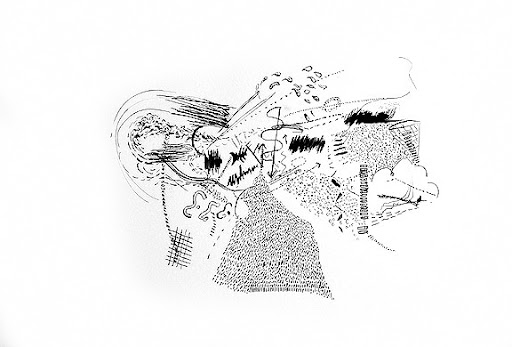 These works are based on a continual investigation, attempting to gain further understanding of “singularity“. These sculptures and drawings operate as a tool for accessing, structuring and storing information.

This work gives form to a non-hierarchical model of my own devising, which is organic, flexible, effective and above all alive. 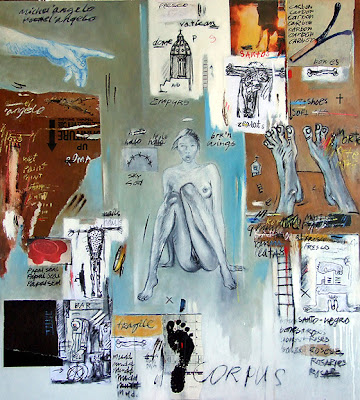 The subjects of Akyem can surprise the unwary, many times there are depictions of genitalia or violence or even a mixture of the two in a rather Picasso-ish manner. Even the musings of Ras Akyem on his works’ own significance is one which also borders on ethereal if not total mysticism, and this is what he has to say –

“?art is an ancient way of thinking; an act of magic??.an intuitive response to an ancestral/primal imperative, a passionate urge to create or destroy“

The Act of Painting

I have recently discovered that overt planning of an art-work, often establishes parameters/limitations which merely serve to restrict, confine and reduce the creative intuition to an exact-science; confining the imagination and blocking the path to potential discovery?. Hence I commence my work with a vague sense of intent, which is only realized/revealed during the actual creative process!

In the “ritual” of making art, I seek to give evidence to something which has no other mundane means of manifesting itself; and always with the hope that the result (when it emerges) would surprise me?.. consequently, in this new body of work I’m attempting to map/negotiate that “uncertain” space/terrain in the sub-conscious where reality exist with-out the burden of meaning?.. and could be defined by pre-requisites other than linear logic??. 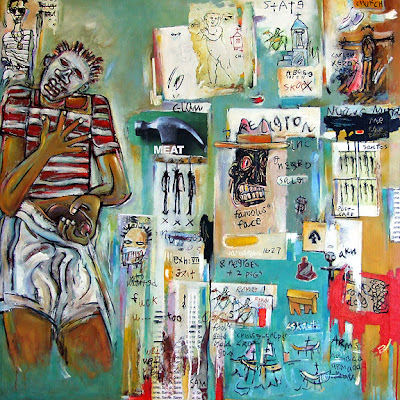 1. ?.. The “Blakk-Body” in exile, it’s amputated/disconnected life ?line from the ‘cultural-womb’ that once nurtured and nourished us?.

2. The interruption and sometimes total loss of the “Ancestral memory”, compounded with the torturous gradual decay of everything that defines it’s existence.

3. Re-configuration and re-location of the “Blakk-psyche” in the new Global village space??.

4. TEXT?.. the use of words in the paintings is a ploy intended to establish oblique verbal gestures which serve to evoke or amplify visual experience??. Alternately, the texts may also function as a mere spatial device, which assist in defining atmospheric perspective on a luminal two-dimensional picture plane?..

5. EXILE?.These paintings explore, and attempt to articulate the exquisite loneliness and indifference that one experiences as an artist in a HOSTILE visual space?. And especially when that space is defined as HOME???.! 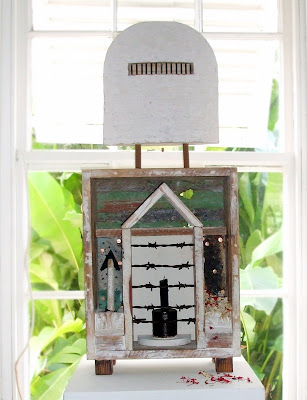 Where is South and what is West? Alison Thompson, one of Adam’s contemporaries from the Barbados Community College posed this riddle as an answer –

The intersection of two axes. One horizontal, one vertical.

A meeting point. A point of transition. A moment of opportunity. Of potential.

Horizontal and vertical; physical and abstract; mortal and divine.

The moment of encounter; of exchange; of complementarity; of otherness; a moment of transition, translation, creolization.

A grid; a joint; a ladder

Coordinates that mark a place; a juncture.

Where you find Legba. Elegua. Eshu ? the gatekeeper. The trickster. The intermediary between the spirit world and the everyday. Change, chance, malice, fate.

It is the grid. It is the plan. The model.

The skeletal shell forms a porous screen that shapes space. It is the force field that defines interior and exterior. Vortexes, spirals, warps. Fragile attempts to represent the universe, to envision infinity.

It is the mark. It is the X that asserts and negates.

The vertical and horizontal ? the ladder climbing; the spoke radiating.

The horizontal as diaspora; the vertical is the Ascension or the Fall.

The journey and the destination;the present stretching out between the future and the past.

The dialectic between the physical, the embodied, the bound, the sensorial;

To touch. To focus. To understand.

One can easily spend hours contemplating all of the intransigent micro and macro significances and nuances interlocking between these two visual dancers, maybe it’s just best to buy a work of each and use it as a mental rock garden when your brains need cleansing – you’ve got ’til early December anyhow…

BTW: There is a new section at Lancaster, it’s called the Gallery Shop and no, not Shoppe like Olde Ynglishe – this is an area where items are slotted at what some may view as more financially accessible artwork from Virginia Trieloff among others and it includes jewellery and pallette-works as well! Very appetising…