Sorry for taking so long to update, had a very busy week – Facebook is incredible, as I mentioned back in September – it was via this internet social network tool that Surfer’s Cafe promoted a comedy show and used no newspaper advertising and had the event sold out!

Separate to this, in Heat Magazine I have seen Kingsley Thorne at war with Clairmonte Grazette over who has the oldest model agency, he also hosted Fashion Police there and did some ratings on various personalities, word reached the Barbadian blogosphere, and ex-Madd man Peter Boyce was annoyed when he wasn’t included – well, he finally made the grade, probably as he helps to promote Thorne.

Yet, apart from that, as we all know I present Lottery but it’s my aim to please the owners, not Kingsley, right? Yet he chooses to display the following on Facebook, granted this wannabe Blackwell has the right to share his views, but he should expect responses (Thorne had so many typos I had to correct, someone really needs to show him the Spell-Check button) –

Most Talked about Radio Personality

Band leader of the Year

Woman of the year (Mia Mottley)

Man of the year (David Thompson)

Shows that will make you commit suicide or have a coma

Sprite of the Nation Show

Worst and Painful editorial to read on Sunday: (the Social Scene)

Now, let’s get this straight, I appreciate his right to speak out but he has to remember – I also can deliver my own opinion! In addition, for the most part I do Double Draw, it’s on Saturdays at lunchtime therefore I wear a plain tee-shirt and slacks under a navy blazer. It’s only on a few occasions where I hosted Mega 6 and would use my Mandarin suit, so if he’s gonna critique, understand not only the circumstances but also the whole nature of the product!

But I mean really, what is so special about Kingsley Thorne anyway? Ladies, would you be caught dead in THIS outfit? 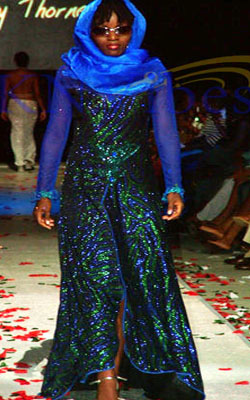