Putting passion to pen, I tell you it’s long but very much worth it! I got a copy of this article from the Huffington Post which is written by Frank Schaeffer, a former Right Wing Republican and a founder of the Religious Right. It is a brilliant and somewhat emotional endorsement of Obama, that echoes through all our dreams – be they Bajan, Caribbean, International and so forth… The Bajan Reporter thanks my erstwhile colleague who made the time and effort to fwd it 2 me…

Great presidents are made great by horrible circumstances combined with character, temperament and intelligence. Like firemen, cops, doctors or soldiers, presidents need a crisis to shine.

Obama is one of the most intelligent presidential aspirants to ever step forward in American history. The likes of his intellectual capabilities have not been surpassed in public life since the Founding Fathers put pen to paper. His personal character is also solid gold. Take heart, America: we have the leader for our times.

I say this as a white, former life-long Republican. I say this as the proud father of a Marine. I say this as just another American watching his pension evaporate along with the stock market! I speak as someone who knows it’s time to forget party loyalty, ideology and pride and put the country first.

I say this as someone happy to be called a fool for going out on a limb and declaring that, 1) Obama will win, and 2) he is going to be amongst the greatest of American presidents.

Obama is our last best chance. He’s worth laying it all on the line for. 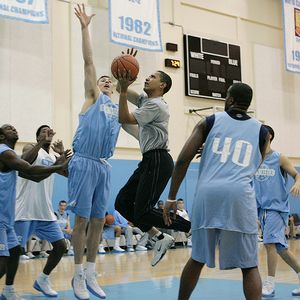 Good stories about Obama abound; from his personal relationship with his Secret Service agents (he invites them into his home to watch sports, and shoots hoops with them) to the story about how, more than twenty years ago, while standing in the check-in line at an airport, Obama paid a $100 baggage surcharge for a stranger who was broke and stuck. (Obama was virtually penniless himself in those days.) Years later after he became a senator, that stranger recognized Obama’s picture and wrote to him to thank him. She received a kindly note back from the senator.

(The story only surfaced because the person, who lives in Norway, told a local newspaper after Obama ran for the presidency. The paper published a photograph of this lady proudly displaying Senator Obama’s letter.)

Where many leaders are two-faced; publicly kindly but privately feared and/or hated by people closest to them, Obama is consistent in the way he treats people, consistently kind and personally humble. He lives by the code that those who lead must serve. He believes that. He lives it. He lived it long before he was in the public eye.

Obama puts service ahead of ideology. He also knows that to win politically you need to be tough. He can be. He has been. This is a man who does what works, rather than scoring ideological points. In other words he is the quintessential non-ideological pragmatic American. He will (thank God!) disappoint ideologues and purists of the left and the right.

Obama has a reservoir of personal physical courage that is unmatched in presidential history. Why unmatched? Because as the first black contender for the presidency who will win, Obama, and all the rest of us, know that he is in great physical danger from the seemingly unlimited reserve of unhinged racial hatred, and just plain unhinged ignorant hatred, that swirls in the bowels of our wounded and sinful country. By stepping forward to lead, Obama has literally put his life on the line for all of us in a way no white candidate ever has had to do. (And we all know how dangerous the presidency has been even for white presidents.)

Nice stories or even unparalleled courage isn’t the only point. The greater point about Obama is that the midst of our worldwide financial meltdown, an expanding (and losing) war in Afghanistan, trying to extricate our country from a wrong and stupidly mistaken ruinously expensive war in Iraq, our mounting and crushing national debt, awaiting the next (and inevitable) al Qaeda attack on our homeland, watching our schools decline to Third World levels of incompetence, facing a general loss of confidence in the government that has been exacerbated by the Republicans doing all they can to undermine our government’s capabilities and programs… President Obama will take on the leadership of our country at a make or break time of historic proportions. He faces not one but dozens of crises, each big enough to define any presidency in better times.

As luck, fate or divine grace would have it (depending on one’s personal theology) Obama is blessedly, dare I say uniquely, well-suited to our dire circumstances. Obama is a person with hands-on community service experience, deep connections to top economic advisers from the renowned University of Chicago where he taught law, and a middle-class background that gives him an abiding knowledgeable empathy with the rest of us. As the son of a single mother, who has worked his way up with merit and brains, recipient of top-notch academic scholarships, the peer-selected editor of the Harvard Law Review and, in three giant political steps to state office, national office and now the presidency, Obama clearly has the wit and drive to lead.

Obama is the sober voice of reason at a time of unreason. He is the fellow keeping his head while all around him are panicking. He is the healing presence at a time of national division and strife. He is also new enough to the political process so that he doesn’t suffer from the terminally jaded cynicism, the seen-it-all-before syndrome afflicting most politicians in Washington. In that regard we Americans lucked out. It’s as if having despaired of our political process we picked a name from the phone book to lead us and that person turned out to be the very man we needed.

Obama brings a healing and uplifting spiritual quality to our politics at the very time when our worst enemy is fear. For eight years we’ve been ruled by a stunted fear-filled mediocrity of a little liar who has expanded his power on the basis of creating fear in others. Fearless Obama is the cure. He speaks a litany of hope rather than a litany of terror.

As we have watched Obama respond in a quiet reasoned manner to crisis after crisis, in both the way he has responded after being attacked and lied about in the 2008 campaign season, to his reasoned response to our multiplying national crises, what we see is the spirit of a trusted family doctor with a great bedside manner. Obama is perfectly suited to hold our hand and lead us through some very tough times. The word panic is not in the Obama dictionary.

America is fighting its “Armageddon” in one fearful heart at a time. A brilliant leader with the mild manner of an old-time matter-of-fact country doctor soothing a frightened child is just what we need. The fact that our “doctor” is a black man leading a hitherto white-ruled nation out of the mess of its own making is all the sweeter and raises the Obama story to that of moral allegory.

Obama brings a moral clarity to his leadership reserved for those who have had to work for everything they’ve gotten and had to do twice as well as the person standing next to them because of the color of their skin. His experience of succeeding in spite of his color, social background and prejudice could have been embittering or one that fostered a spiritual rebirth of forgiveness and enlightenment. Obama radiates the calm inner peace of the spirit of forgiveness.

Speaking as a believing Christian I see the hand of a merciful God in Obama’s candidacy. The biblical metaphors abound. The stone the builder rejected is become the cornerstone… the last shall be first… he that would gain his life must first lose it… the meek shall inherit the earth…

For my secular friends I’ll allow that we may have just been extraordinarily lucky! Either way America wins.

Only a brilliant man, with the spirit of a preacher and the humble heart of a kindly family doctor can lead us now. We are afraid, out of ideas, and worst of all out of hope. Obama is the cure. And we Americans have it in us to rise to the occasion. We will. We’re about to enter one of the most frightening periods of American history. Our country has rarely faced more uncertainty. This is the time for greatness. We have a great leader. We must be a great people backing him, fighting for him, sacrificing for a cause greater than ourselves.

Frank Schaeffer is the author of CRAZY FOR GOD – How I Grew Up As One Of The Elect, Helped Found The Religious Right, And Lived To Take All (Or Almost All) Of It Back. Now in paperback.