In Barbados, Mark Brown gave the vote of thanks at this year’s “In-Transit” exhibition of the Barbados Community College – he also stole the show with his “Angels In Crisis” and now he’ll have an exhibition of what earned him his degree here over in Antigua on Friday 28th onwards. 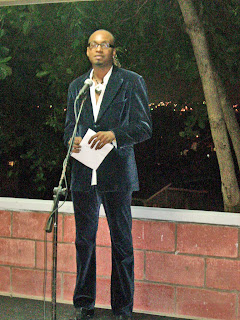 One of his fans is also his teacher, Zemicon Gallery’s Therese Hadchity, who’s bursting with pride at the evolution of Mr Brown who continues to teach art at Antigua’s Grammar School, as she said to the Antigua Sun recently –

His graduation show ?Angels in Crisis? has been well received in Barbados and according to Barbados-based art curator and owner of the Zemicon Gallery, Therese Hadchity, Brown?s work demands attention. 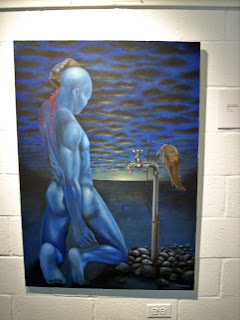 ?He is being hailed as the most outstanding painting student ever to graduate from the college,? Hadchity said. 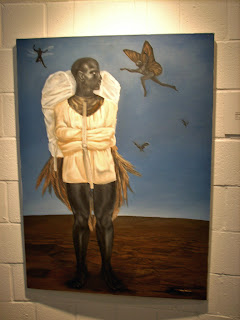 Mark Brown’s immense canvasses display angels in a manner probably not consistent with the Vatican, but have me tempted to write a story or book linking all of the pictures together in some fantastic manner!

Pregnant angels, self portrait with feathers, even a study of Michaelangelo with Caravaggio-like figures added.

The twin-canvas panorama is based on “Pieta” and would be a beautiful introduction for a collector wishing to start their own private gallery.

Fortunately, Mark is a prophet who’s honoured in his own homeland and is even revered, too as the article attested –

Brown, has built a body of work over the past decade that has earned him the reputation of being one of Antigua and Barbuda?s leading contemporary artists… 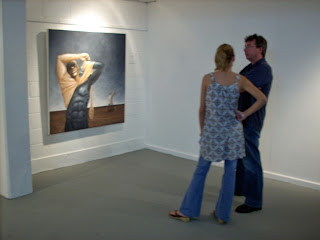 [The artist] is a graduate of the Princess Margaret Secondary School, the Antigua State College A Levels/Teacher Training and has exhibited his work locally and regionally, including at the recently held Carifesta in Guyana.

Mark Brown definitely has an angel watching over him, congratulations – it’s great to see hard work pay off! He still needs a website, though.