?s bfm International Film Festival has introduced audiences to black world cinema having recognized the need to fill a void within the film exhibition scene. 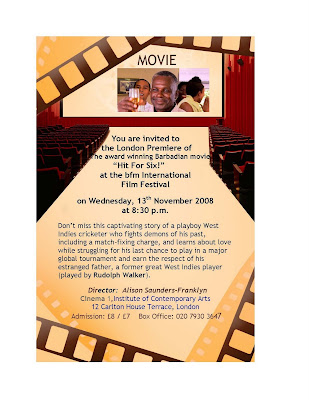 Hit For Six! is the story of a playboy cricketer who must fight the demons of his past, including a match fixing charge. He learns about love while struggling for his last chance to play in a major global tournament and earn the respect of his estranged father, a former great player.

Since the movie premiered on April 18 last year and enjoyed a five-week run in Barbados followed by runs in Jamaica, Trinidad, Antigua and St. Lucia, the movie made the rounds in North America, screening at the American Black Film Festival (ABFF) in Hollywood and in Washington D.C. at the prestigious American Film Institute. This year, the movie screened at the Pan African Film Festival in LA, it was a selection at the International Film Festival in South Africa and next month?s showings will take the film?s director one step closer to her mission.

?I want to share our rich culture and heritage with the world,? stated writer, producer and director of the film Alison Saunders-Franklyn. She is driven by the desire to tell ?one of our own stories and build a local film industry?, viewing the movie?s world tour as a step for people.

Soon after Hit for Six! made its debut, it won three awards at the Bridgetown Film Festival in – Best Actress, Best Cinematographer and Best Barbadian Film.

The movie was filmed on location in and Trinidad and it features an all cast. It was produced by Blue Waters Productions .