Nearly three hours long, Namibia: The Struggle for Liberation is an epic that spans 60 years of history. With 150 speaking roles in multiple languages and dialects, dramatizing Namibia?s fight for liberation from South African occupation that culminated in Namibia?s independence in 1990. The cast includes Carl Lumbly and Danny Glover as well as local African actors, and the crew used former soldiers from both Namibia and South Africa who had fought against each other. A Winter Tale is a 2007 Canadian dramatic feature film, written, directed and produced by Frances-Anne Solomon. It premiered at the ReelWorld Film Festival where it won the Outstanding Canadian Feature Film Award, as well as Special Mention in the Outstanding Screenplay category. It tells the story of a black men’s support group that begins to meet at a Caribbean Takeaway restaurant in the aftermath of the shooting death of a local child. It was developed through a collaborative improvisational process with the cast, who were drawn from Toronto’s Caribbean and multicultural communities. It was shot on location in Parkdale, Toronto.

Ezra, a 16-year-old former child soldier who spent ten years living and fighting with a rebel faction, is questioned before a Truth and Reconciliation Commission in the wake of Sierra Leone’s civil war. The commissions, based on the idea of transitional justice and modeled on the one in South Africa, were meant to be not punitive but restorative, therapeutic for those whose human rights have been violated but also for the violators themselves. Ezra is in deep denial and clearly suffering from Post-Traumatic Stress Disorder (PTSD). Only once Ezra admits his crimes, realizes how he came to commit them and repents for the suffering he has caused, will he be ready to rejoin society and make peace with himself.

After being discovered illegally residing in France, a young Senegalese musician is sent home with only 20 euros in his pocket. After a series of poor decisions, he falls into an abyss of failure. A kind of Dakar urban rap musical, Teranga Blues is a reflection on the social mutations affecting the pride of the Senegalese people.

Born in Ogidi, Eastern Nigeria, in 1966, Newton Aduaka moved to Lagos in 1970 after the Biafran War, and then to England in 1985. Following a diploma course in video arts and post-production, he studied film history, art and technique at the London International Film School, graduating in 1990. He wrote and published short stories while working as a sound mixer on a wide range of productions. As a director, his short films include Carnival of Silence (1994), Voices Behind the Wall (1990) and On The Edge (1997), which won him three prestigious awards and numerous special mentions. His debut feature Rage (2000) was released to huge critical acclaim, becoming the first independent film by a black filmmaker to gain a national release in Britain. It was also very successful in international film festivals, winning many prizes including Best Director at the Pan African Film Festival in Los Angeles. Since then he has directed commercials and a further short film, Funeral (2002), commissioned for the Cannes Film Festival alongside similarly-themed work from internationally renowned directors such as Walter Salles, Arturo Ripstein and Amos Gitai. 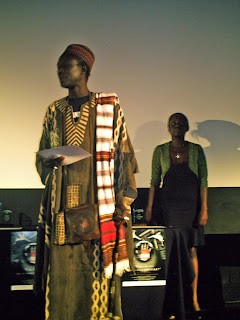 Moussa Sene Absa is an artist, writer, musician and film director. He made his debut as an actor, then moved to directing with the production of his own stage play, La L?gende de Ruba. In cinema, he wrote the screenplay for Les Enfants de Dieu, which received an award at the Francophone Film Festival. His directorial debut, the short film Le Prix du Mensonge, earned him the Silver Tanit at the Carthage Film Festival in 1988. His film Tableau Ferraille won the award for best photography at FESPACO 1997. His next work, Madame Brouette won the Silver Bear at Berlin Film Festival 2003. He has also produced 400 episodes of a popular daily situation comedy, Gorgorlu, for Senegalese television. His talent as a painter is also well established and his work has been exhibited in Senegal, Europe and North America.

Lauded as one of America?s most gifted filmmakers, Charles Burnett has just completed his largest film ever, Namibia: The Struggle for Liberation. While earning his MFA in filmmaking at UCLA, Burnett made the now classic Killer of Sheep, and on that basis he was awarded the prestigious John D. and Catherine T. MacArthur Fellowship (also known as the “genius grant”) with others to follow from the Guggenheim Foundation, the Rockefeller Foundation, the National Endowment for the Arts, and the J. P. Getty Foundation. He is also the winner of the American Film Institute’s Maya Deren Award and Howard University’s Paul Robeson Award for achievement in cinema. To Sleep with Anger won the 1991 Independent Spirit Award for Best Director and Best Screenplay for Burnett and Best Actor for Danny Glover, and the Library of Congress has entered it along with Killer of Sheep in the National Film Registry. Among his numerous films since then, Burnett has written and directed Nat Turner: A Troublesome Property, a splendidly mind-boggling work about history as interpretation, and also Warming by the Devil?s Fire, a sensual, quasi-autobiographical tale of an L.A. boy getting religion and the blues in the same visit back home to Mississippi.

Ed Santiago is a filmmaker who has worked on more than 30 films. His credis as an editor are extensive and include Namibia: The Struggle for Liberation and Warming By the Devil?s Fire an episode of The Blues, the 2003 documentary film series produced by Martin Scorsese, which was dedicated to the history of blues music.

Frances-Anne Solomon is an award-winning filmmaker, writer and producer. Born in England of Trinidadian parents, she was raised and educated in Trinidad, lived and worked in the UK for several years, and has been based in Toronto, Canada since 1999. She trained in Theatre Arts at the University of Toronto, and the Lecoq School of Mime in Paris before moving to Great Britain where she built a successful professional career with the BBC as a Producer, Director and Writer. Since her return to Toronto in 1999. She is the artistic director and president of the two companies she founded, Leda Serene Films, her film and television production vehicle, and Caribbean Tales, a not for profit multimedia company producing educational resources based on Caribbean-heritage storytelling, including audio books, documentaries, websites, and an annual Caribbean-themed film festival. From 1989 to 1998 she was also a radio, film and television drama producer for the BBC in England.

Sade Turnipseed is Director of Education and Community Outreach at the B.B. King Museum and Delta Interpretive Centre, Mississippi. She is executive producer of FESPACO 2005, a documentary film focusing on the Paul Robeson Award Initiative, which organised filmmakers from the United States, Canada and the Caribbean on a journey to FESPACO, in Burkina Faso, West Africa. They were competing for the Paul Robeson Award for the most outstanding film from the African Diaspora. Ms. Turnipseed has served as executive producer of educational and literary concept developments for film, television, radio, live stage events and festivals. She received notable acclaim as Programming Director for PCTV Network television in Oakland, CA, and the San Francisco-based Public Broadcast Services (PBS) affiliate KQED-TV.