As everyone is aware by now, on weekends this good self plays host for Double Draw and I always get the stupid jokes from various ppl about calling the right numbers – anyhow, I handle the 12:30 pm and the 4:45 pm slots. So there’s a fair lapse between the shows and thus allows for a lunch-break, right?

I see in the Saturday Sun that Kentucky Fried Chicken is returning their Famous Bowl offer, this is where you get mashed potato with gravy and corn with popcorn chicken and draped with 3 different grated cheeses and a Pepsi to drink for $14.99 Bds – what is cool is the bowl has a resealable lid and is microwavable and dishwasher-safe, so you can reuse the item for a long time after!

After the 1st draw, I head over to KFC’s Hastings branch, but having had previous horrors with KFC I made sure to ask WHEN will the Famous Bowls be ready? I was made to wait for a bit then learn they’re “on hold” until the corn arrives… Quite naturally I ask how long will this take and I am told when the corn arrives in a perfect rendition of Catch 22! I blurt “Typical!” then exit the queue and stalk out to my car.

This is the same KFC asking for people to join as staff and be so service oriented they want to dub them as customer maniacs? KFC needs an extra Menu sign – one where they can slide items as to which is IN or OUT like how you know when to ask for certain Insurance Agents or Media Houses by those kinda signs…

(So you mean to say Kentucky couldn’t alert all branches that between x-date and y-date a product promotion will be in effect and please send all requisitions in early to ascertain all necessary spices/ meats/ vegetables, etc. will be ready ahead of 1st day’s issue and please make sure at least 25 of said product are pre-cooked awaiting eager Public response?)

Zip over now to Pandora’s Plaza which is now Bayside Plaza, jump out of my Platz and see a place opposite Kingston 10 with what seemed like Jamaican patties. I figured this may be cheaper than a roti, so I ask the young girl inside if these are Jamaican patties, she answers as she bends under the counter to grab something but I can’t hear so I ask if she can repeat…

“I SAID ‘YES,’ NUH!” she snarls – my eyebrows rise and nearly lick off my sunglasses and I state quite plainly for her to hear; “This is how you treat me and I am here to spend money? Certainly not with you? You must be mad!” I do like Johnnie and Keep Walking, as a customer she was about deal with looked on in amazement.

{What is it with Bajan establishments and being gracious? The other night I felt like ordering Pizza not from John-O but NY Pizza, call Blackrock they don’t deliver – then I try Holetown… Where you calling, she asks… I tell her and before another word can escape – “Oh God, that too far!” What is the distance limit, I query? I learn it’s 5 miles and so I ask if Bank Hall is 5 miles from Holetown… “Well I have to ask the driver and see if he feels like going so far…“ 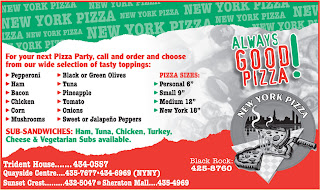 {At that point, my head was toasty enough to do a stone-baked pizza and I just quietly muttered “Don’t bother,” whereupon she realised too late she was LOSING MONEY and she then back-pedalled to say what she meant is if the pizza wouldn’t be cold by then! ROFLMAO, ya shoulda thought customer-wise sooner, bee-yatch! I repeated not to bother and thanked her for her time and wished her good night as I took joy in hanging up as she dithered on too late…

{The sad thing is, only a few days beforehand I order a pizza at their Quayside branch and they hand me a medium, I am a constant regular there and ask if I ever ordered a anything but a Large and the girl says I just thought… Did you ask, I countered? She stares at me and just like i would a few days hence I mutter, “DON’T BOTHER!” It may be more cost-effective to make your own pizza, folks – most supermarkets now have sauce, cheese, dough, sausages, ham and Farmer’s choice even makes Pepperoni too!} 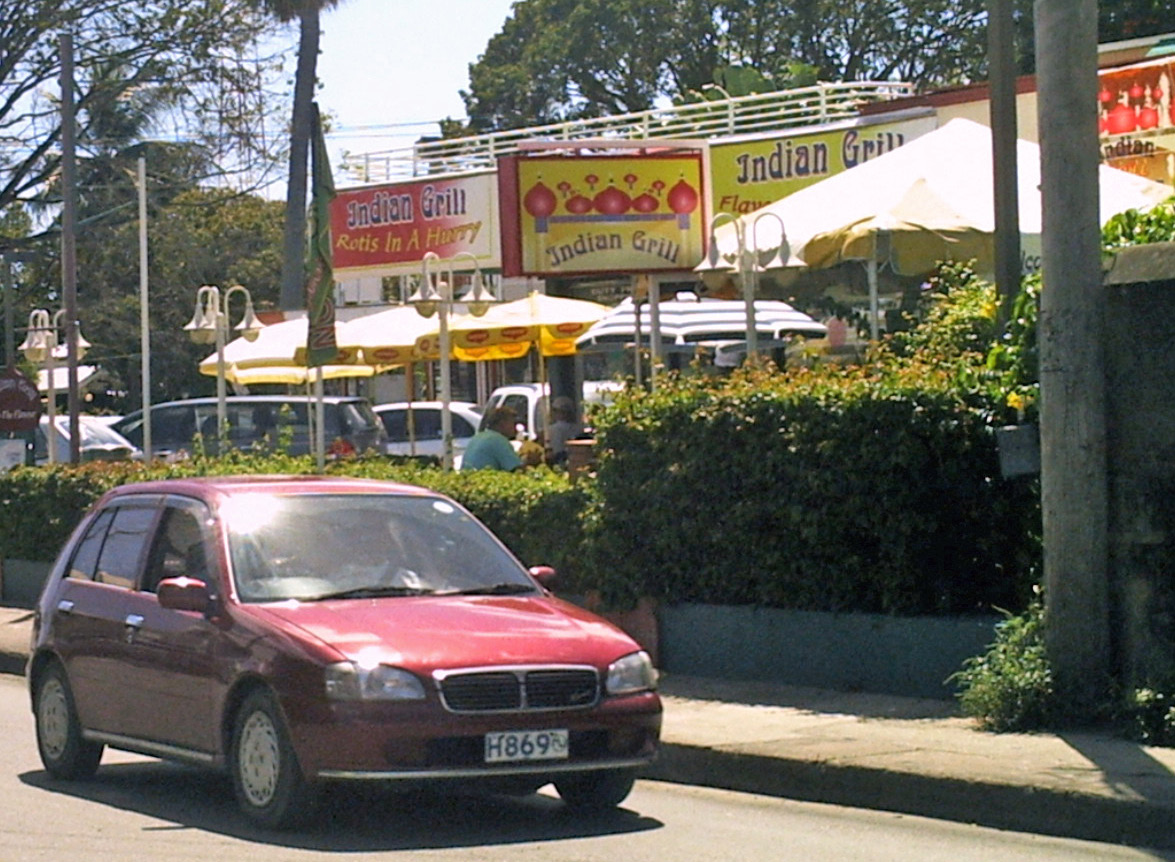 I digress – anyways, back to Saturday gone; I march straight over to Indian Grill, this is at the same plaza where I have had many pleasant memories until this Saturday… I ask for an all-shrimp with kuchela. They ask if I want vegetable with that, I say no – just pure shrimp with the spice… So I get home to open the bag and realise the roti is quite a bit smaller than it used to be and the thing is salty, even by my heart-clogging standards! I soon gonna make Pizza with Giant African Snails, then!