Dying for Dickey? Live it Up! Come November 18? DYING FOR REVENGE hits US bookstores, Caribbean venues too?

Get ready – this November, our favorite hit-man Gideon is back, and he?s better than ever. Eric Jerome Dickey’s new book DYING FOR REVENGE, the next explosive installment in the Gideon saga, and the follow-up to last year?s Sleeping with Strangers and Waking With Enemies, hits bookstores on November 18th.

Gideon has vowed to leave his life as a hit-man behind. But he soon finds out he can never run too far from his past. When a job in Detroit goes bad, he should have killed his client; a cold-blooded woman who hired him to kill her husband, when he had the chance. Now, with money and power to spare, this woman will stop at nothing to end Gideon?s life. Gideon heads to the West Indies in search of his most dangerous adversary yet. Amidst the palm trees and white sands, Gideon must defeat his pursuer, and find a way out of this deadly game before it?s too late. But can he ever leave his life of murder and mayhem behind? 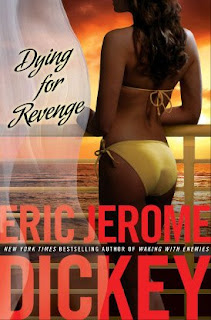 DYING FOR REVENGE is a heart-stopping, pulse-pounding ride through a Caribbean paradise.

Tour Dates {NB: None in Barbados nor Caribbean, yet – so holler de man ‘pon MySpace!}