I understand on Friday home drums indeed beat first – I also missed the chance to see a Minister wukking up to the music of Mr Dale, as Barbados copped all categories of Best Of Show for CGCS-XV, but for me they did not impress so much, with one exception who will be mentioned further in.(If home drums beat first, why does CBC have a Swede for a GM? Photo courtesy – NationNews)

Now the rubble has settled, let’s look at what was right and a bit of what was wrong at CGCS-XV (C’bean Gift & Craft Show 15)… The operators at Cuban and St Lucian booths understand not only what it takes to move product – a profit but give people the illusion of a bargain yet make up for cost with SERVICE!

Many of the Jamaican stall operators did NOT want you taking pictures unless you’re buying! That was dumb – how will you promote your product if one’s reputation is listed as sour and dour? The internet as a marketing service is a global calling card! Now rather than promoting you, I anonymise you and make your work harder, steupse! Also, they priced their work beyond reason – remember, it’s easier to sell a 1,000 tickets at a dollar each rather than move a single ticket for a thousand dollars! 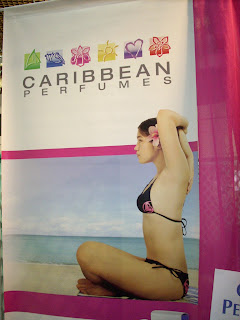 This is what was understood by Cathy Rioux of Caribbean Perfumes (website under construction, but their line of items are available at Best Of Barbados), she has seven different aromas for the ladies and two colognes for the men – the Men’s array were $20 US each, so I immediately got one of each after sampling Tropique and Periquito! 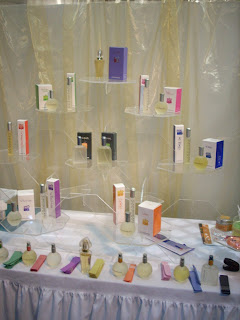 Tropique uses a blend of wood and spice as base and top notes, while Periquito which I really favour is more citrus in its formation. 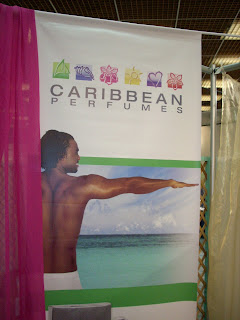 When Ms Rioux saw my Media tag she asked which service I am from, so I explained it’s my own News Blog and she immediately gave me a Press Kit, where I was surprised to learn that Caribbean Perfumes has actually been around for almost 30 years!

Another delight was the leather stalls from Cuba where a gent’s wrist-pouch sets you back only $18 US! They had huge Ladies’ bags for $50 US and they would offer to wrap the items in plastic until you got home, nice – not necessarily environmental, but definitely service-oriented! I would go back to their stalls again and again, the wife also bought herself marvelous wire and stone jewellery for $12 US – a pendant and bracelet, they added the earrings to encourage her to but the suite!

The winner of Best Design: School really earned it with great artwork from young BCC students on display, their Home Page is also under construction, but they had a profile brochure sharing out. In it, Bajan Reporter learned how there are two Bachelor programmes – one for Fine Arts and the other in Graphic Design. There’s also an Associate Degree in Visual Arts, but it seems it’s usually the Graphic Design students who land on their feet, so to speak!

There are opportunities awaiting these pupils at many Ad Agencies in Barbados with chances to do photography, illustration, advertising, graphic communication, copywriting and presumably; animation.

One dude who really stood out was 20 year old Romal Jones who’s in his 2nd Year pursuing a Bachelor Of Fine Arts and is in his fourth year at BCC, he did a very unique and intriguing study called “Croc-Block,” which is examining a crocodile in segments!

Originally, he wanted to do a reptile in Full Scale but he felt that approach was not giving the creature justice, so he decided to do close ups on the parts of what scared people the most. He has never actually seen a crocodile, only using pages from National Geographic to help him render his 3-D illustrations – but he plans to get up close one day, he says he has it on a To Do list! Send me a telegram about it, Romal, LMAO!

Now, readers are antsy – they want some indication of what Fashion was on display, so I shall attempt my best… As we all know, I am no Blackwell (Nor would I really want to be)!

St Vincent was the only member of the region to acknowledge there are Full Figured women who can sport fashion and it was very refreshing! 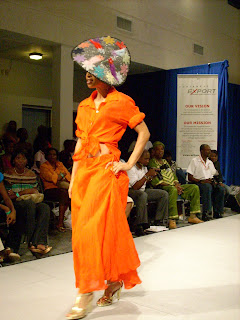 But Suriname went from sublime?

To this! I have no idea what Wilma was trying to achieve here, nor if she knew either…