It was a sweet end to group D of the Digicel Caribbean Championships (DCC) for Barbados who kept their composure and patience for a solid come from behind 3-1 win over hosts St. Kitts-Nevis when the final match in the group and the first phase of the competition ended on Sunday evening.

Despite losing out as the group winner, St. Kitts still advanced to the second phase of the Championships and will face off against group G hosts Trinidad and Tobago, Guyana and Antigua & Barbuda in early November. As group winners, Barbados sealed their place in group H to be contested in Cuba.

The team from the Land of the Flying Fish flew high in the mountainous host Island to silence the large home crowd at Warner Park which was very voluble after the home team, who held the upper hand for most of the first half had taken the lead when captain and playmaker George Isaac scored a scorcher in the 13th minute.

Isaac, who was marshalling the rampant Kittitians, received the ball mid way the Barbadian half, weaved his way closer to goal and from 20 meters out unleashed a well calculated right foot shot that went to the right of advancing Barbadian goalkeeper Adrian Chase and into the V.

The goal was just reward for the home team which was dominating play at the time and they continued to do so by stringing together passes which saw them in the Barbados half of the field for long periods. 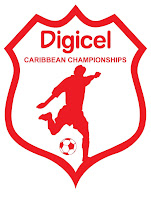 Isaac, in tandem with Jason Lake on the right side, did present many challenges for the Barbados team who were allowing the home team to dictate the flow of play. The Barbadians, who made five changes to their starting line up from the British Virgin Islands encounter, were guilty in the first half hour of playing too much air ball, perhaps a ploy since they were taller than their opponents, but St. Kitts were playing the ball on the turf which brought them success.

After taking the lead and looking very good, St. Kitts lost their focus but the Barbadians were now beginning to put things together. With the height advantage, the Barbadians always looked dangerous on set plays as they did in the BVI game and two of their goals came via the same route from defenders.

Goal keeper Julani Archibald was called into action to pull off a save off an acrobatic nature in the 34th minute from a well taken free kick as he tipped the ball over the bar and out of danger. But their lead was soon to be nullified from the resulting corner which was taken by seasoned campaigner for Barbados, their Captain Norman Forde.

Forde?s crossed ball was again touched by Archibald, who was not able to gather cleanly, and the lurking Johnathan Straker did the honors of completing the play with goal in the 35th minute. The equalizer came at a time when the home team was still dominating play.

A few minutes later, Barbados got the chance to forge ahead when Lashida Williams found himself ahead of the defense but placed the ball straight to goalkeeper Archibald. And just when it looked like the score would have remained tied with half time approaching, Barbados won a free kick 30 meters out on the left side of their opponent?s goal. The long swirling shot was taken and the tall Barbadian defenders came into action once again, making the home team pay for poor marking as they stood flat footed allowing Barry Skeete to space and time to let off a shot that beat the keeper on the stroke of half time.

The confidence and momentum Barbados had built up in the final 10 minutes of the first half was brought over to the second as they upped the offensive tempo on the hosts. The energetic Isaac continued to work overtime for the Kittitians but the frustration of not being able to get the equalizer soon got the better of him when he drew the first red card of this leg in the 67th minute.

Isaac?s exit from the game was a major setback for the home team and they never recovered. The game was put beyond their reach ten minutes before full time when Lashida Williams scored his second goal in as many matches.

The result was good for Barbados who topped the group but the home team had done enough work when they hammered BVI 4-0 in the opening game last Wednesday to finish as the runner up.

Twelve countries will compete in the second phase of this the Third Edition of the DCC, four will be in each group with matches scheduled to be played throughout October and November in Guadeloupe, Cuba and Trinidad.

The top two from each group will advance to the finals in Jamaica in December when they face defending Champions Haiti and the host country for the top prize of US $120,000