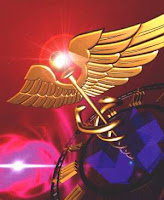 Residential Doctorate in Public Health Policy and Programming at the London School of Hygiene and Tropical Medicine.

Mr Daniel, a Public Health Assistant at the Public Health Department of the Ministry of Health, left Barbados late last month to take up his award.

The British Chevening Scholarship Scheme is a prestigious international award given for one year of postgraduate study (fees, accommodation and a stipend) at institutions in the UK. Awards can be given for studies in any field, and preference is given to students who aim to return to their home country, which then benefits from the newly acquired skills, knowledge and expertise.

Successful candidates are likely to be already established in a career, with a track record of excellence and achievement, and the prospect of becoming a leader in his/her chosen field. Past scholars from the region include government ministers and senior public and private sector officials.

Applications for the next academic year can be made online