Upstate Reggae on the River Eco Music Festival was held at the glorious and spacious Croton Point Park nestled on the beautiful and serene Hudson River in Croton on the Hudson to a massive crowd.

Sponsored by Guinness, Red Stripe, In Ticketing, Forever Reggae TV, SONU Water and Baba Roots, LMJ Production, LLC produced the event to raise awareness about the environment and to create a niche within the cross culture of music. The family event boasted act from all genres of music coming together for a wonderful event.

?We were totally thrilled to be a part of the festival,? said folk singer Lydia Adams Davis, sharing that same sentiment was Steve Newland, the lead singer of Rootz Underground, ?We want to be a part of this again next year. I really love the vibes at this cultural festival.? 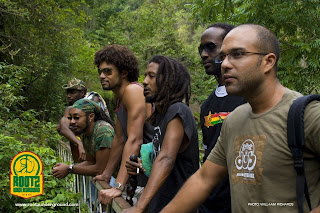 Rootz Underground capped the festival and delivered a radical presentation for the festival revelers and had everyone totally awed. They performed songs from their new album, ?Movement,? including ?Victim of a System.?

Latin rock super group “Seguida” also lit up the park with there fusion of jazz, pop, and Latin which created the big band sound they were well received. Mystic Dub who drove in from Michigan was well received by the audience as well.

The venue, now dubbed, ?Little Jamaica,? was transformed into the various colors of Red, Green and Gold that wrapped the border of the river. All artists performed wonderful and were well received. Local acts, Songs of Solomon, Ragga Lok and Living Truth stole the hearts of the crowd as they spoke to the audience and encourage them to live ?Green.? Other performers included folk singer Lydia Adams who sang for the little ones and Carlos “GoGo” Gomez .