I get so many tips from so many friends – like Rene Holder, Betty Holford and many others, but this one came all the way from Washington from a long time pal, researched it and learned it’s still crispy from Ebony-Jet’s National page, an article from Goldie Taylor on the Massacre from Alaska who already sees herself as Pres and McCain as one foot in the grave, then again – knowing the GOP? Maybe she’s aware of what we only suspect… (Usually, I strew articles with links – making subtle sarcastic commentary at times – but this one has few links since for the most part, to me, Goldie is rather succinct)

I have been a mother all of my adult life. A single working mother. I put off dating, took menial jobs far beneath my qualifications and baked my share of ginger bread cookies for PTA Night, all so that three incredible children could have better. I chose their lives over mine. I don’t have to tell you that it wasn’t easy. Unfortunately, my story, our story, is not
unique.

We slept in cars, bought groceries with food stamps and prayed for a better day. When that wasn’t enough, I put myself through school at Emory University and took a part-time job as a staff writer at the Atlanta Journal Constitution. That was over a decade ago.

Along the way, things got better. I’ve been an executive at two Fortune 500 companies and a practice director at two multinational public relations firms. Today, I own an advertising agency and I’ve authored two novels. A third and fourth are on the way, God willing. All of this was possible because somebody laid a brick or two on the road for me.

A few weeks ago, I woke in tears. It was my 40th birthday and certainly not a time for sadness. Rather, I cried in joy because for the first time I realized and could embrace the value of the struggle. The bright little girl, who once cried in my arms because we didn’t know where we were going to live, was headed off to Brown University. The small boy who had been the “man of the house” far too soon was now truly a man. And the tiny, angelic baby who had come to this world precious and innocent just 15 months after him was now a 16 year old girl headed out to her first job interview.

For all of this, maybe I should be proud of a woman like Sarah Palin. Maybe, just maybe, I should be rejoicing in John McCain’s selected running mate.

I’m not “bed wetting liberal” nor am I a “right-wing zealot.” What I am is a working mother. And I cry foul.

I won’t, for a moment, denigrate her experience or lob spit balls at her family. I will, though, take issue with what she knows. Or more succinctly, what she does not know. Living in Alaska, I’m not sure how much she knows about the people living in inner city Baltimore. I don’t know how much she cares about the 125 murders this summer in Chicago. I have no idea what she believes about HIV/ AIDS and the havoc it wrecks on Black women or the cancer rates in East St. Louis. She hasn’t said nary a word about Hurricane Katrina or the infant mortality rates in Appalachia.

I do know that she’s a life-time member of the NRA, a proponent of individuals who wielded the very weapons that killed my father and brother. I do know that she ?lives really close to Russia,? but I’m not so certain she is ready for Putin. I know she wanted to ban books for public libraries and sex education in schools, but that her 17 year old is pregnant and preparing for a shotgun wedding.

I know that she loves her husband enough to allow him (and probably did herself) use her office to settle a personal score–one that the McCain campaign would now like to cover in under a blanket of Juneau snow. I know that the Alaska Independent Party, and its secessionist platform, was enticing enough for her to attend its conference (and for her husband to become a card carrying member). Does she love her country? I’m sure. Enough to support those who want to leave it.

But I have no earthly idea what she knows (or could possibly know) about national domestic policy or foreign diplomacy. For all of her working class values, she never once mentioned the Middle Class in her diatribe that mocked her opponent’s experience. Having been the mayor of Wasilla (pop. 6,000 at the time) and governor of Alaska (a state a smaller than the county I live in) for a little over a year, she felt she was qualified to do that. And obviously, so did John McCain.

If she’s qualified, then so am I.

But in this country I love, she has been afforded the ability to run. The very constitution she says doesn’t apply to the men at Guantanamo says she can. But this is about more than that.

As Gloria Steinem said in a recent Los Angeles Times editorial,“Feminism has never been about getting a job for one woman. It’s about making life more fair for women everywhere. It’s not about a piece of the existing pie; there are too many of us for that. It’s about baking a new pie.”

The good news is thanks to Shirley Chisholm, Elizabeth Cady Stanton, Angela Davis, Condoleeza Rice, Anita Hill, Madeline Albright, Maxine Waters, Kathleen Sebelius, Hilary Rodham Clinton and a slew of others, there are 18 million proverbial cracks in the ceiling. Our collective political and economic power is due to the strides (and leaps) they, and others, took on my behalf.

I am grateful. I am deeply humbled to stand on the bricks they’d laid before me.

But, whatever our struggle was (and is) that last thing I want is to be patronized. Just as I cannot support just any African American who decides to offer themselves up for public service, I will not toss my vote to someone just because we share the same chromosome mix. To do so would dishonor the vow I made to my children, to myself. I did not vote for Al Sharpton, wasn’t old enough (nor would I have) voted for Jesse Jackson and I certainly will not support Sarah Palin. Identity politics, especially in this case, are a sham of the worst order.

I’m looking for a brick layer.

So no, I will not sit idly by as they attempt to suspend habeas corpus at Guantanamo Bay, engage wiretaps on American citizens without a warrant, and hide behind executive privilege when they are caught firing attorney generals based on how well they tow the Republican line. I won’t let them cost us $12 billion a month fighting a war that should have never been authorized and never been waged. Not while working people lose their homes to predatory lenders and watch as we bail out the financial institutions that created the housing crisis. 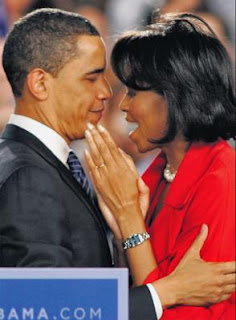 I will not, in the name of history, vote for a woman like Sarah Palin who does not share my values.

But here?s what I will do.

I will continue raising money for Barack Obama. I will get on the phone again and call people in distant states I’ve never met. I will e-mail, call, and knock on doors until the final vote is cast. I do this, not because he shares my skin, but because I admire his principals and he shares my values. I do this because Barack Obama is more than a community organizer, he is a bricklayer. And he sees — just as he sees the light in Michelle’s eyes — my struggle, my worth as a woman.

Goldie Taylor is CEO of Native Brand Communications and chairman of Goldie Taylor OmniMedia, LLC. She is the author of In My Father?s House (Wheatmark, 2005) and The January Girl (Madison Park, 2007 & Warner Books, 2008) and is currently working on her third novel, Come Sunday. Taylor and her children live in Atlanta and New York. For more information, visit www.goldietaylor.net or her blog Second Day at www.goldietaylor.wordpress.com.