Nevis’ Alexandra Hospital recently upped its fleet of ambulances to three when their Minister of Health, Hensley Daniel, handed over the keys to a new fully equipped ambulance, to that institution?s Medical Chief of Staff Dr. Cordell Rawlins. 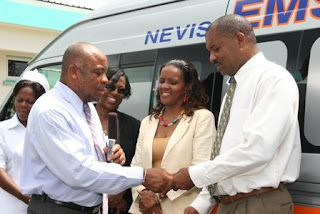 During a brief ceremony to mark the occasion at the institution?s car park, the Nevisian Health Minister said his Government recognised the need to improve on the quality of health care delivery to all Nevisians, therefore, they purchased the fully equipped ambulance with funds from the island?s treasury.

?I have heard enough that we need a new ambulance during the two years we have been in government?it has become customary for us to wait to see if we get some goodwill from somewhere to get an ambulance.

?What we have done is different, which is to use the public?s money to provide an ambulance which is fully equipped and which I am told can begin working [immediately]. The cost of the ambulance is about $174, 577.52? However, for us in the Ministry of Health, we are simply wanting to ensure that all the critical components of Health care are satisfied. [Now] we have an ambulance which is funded fully by the Nevis Island Government treasury? he said.

Mr. Daniel used the opportunity to urge persons who would man the ambulance, in particular the drivers, to care for the vehicle and help to expand its lifespan. 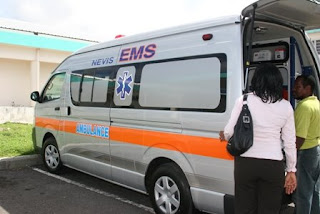 He also expressed the hope, that the people of Nevis saw the purchase of a new and fully outfitted ambulance as the Administration?s move, in its continued efforts, to meet their health care needs. 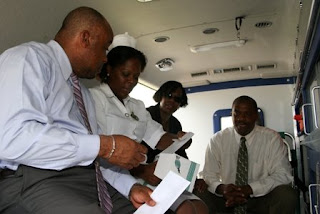 Meantime, Dr. Rawlins said he saw the new ambulance as an important step in the delivery of health care at the Alexandra Hospital and said he was pleased the new ambulance was not donated, but bought by the people of Nevis. He was of the view that it was an indication that the island had come of age.

Dr. Rawlins also joined the Health Minister?s call for health personnel to care for the new ambulance and urged the public to report any incidences of abuse to the health authorities. 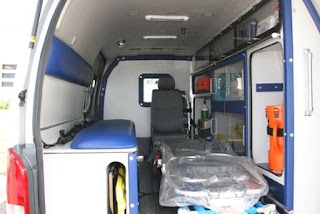 ?It is our money, it is your money so if you see it being operated in a reckless manner you need to let us know the date and time and we will know who the driver is? I am begging you to help us in that regard,? he said.

Here in Barbados, an ambulance was acquired but via the charity of a European representative, although its effect may be yet to reach full potential what with crank-calls delaying rescue and a service constantly under repairs as was recently highlighted in a print edition of Heat magazine…

The Emergency Ambulance Service of the Queen Elizabeth Hospital (QEH) also has one more unit, thanks to a goodwill gesture from the City of Milan, Italy.

At a brief ceremony, officials were present from the Ministries of Foreign Affairs and Health, along with Vice Consul of Italy, Paola Baldi, who handed over the fully-equipped, custom-made ambulance to the Chief Executive Officer of the QEH, Winston Collymore

[Ed’s Note – Let’s hope the signs and notices are all in English, capisce?].

Ms. Baldi said it was a ?gift from the City of to the people of ? and noted that and had enjoyed excellent relations over the years.

She also thanked the Government for its support when ?s candidature was put forward for hosting Expo 2015 [Ed’s Note – A-Ha! Plot thickens…].

Acting Minister of Foreign Affairs, Donville Inniss, said the ambulance would go a long way in assisting the hospital in the delivery of emergency services, and assured the envoy that it ?would be put to good use?.

Stating that the country was interested in working more closely with in the areas of fashion design, furniture design and creative arts, Minister Inniss said would be sending a delegation to in the not-too-distant future.

Acting Permanent Secretary in the Ministry of Health, Irvine Best, said the new ambulance would ?not only bolster the strength of our fleet, it will also contribute considerably to the efficiency and effectiveness of the service provided by the staff of the Emergency Ambulance Service?.

The US $60,000-dollar ambulance US $60,000, comes with better warning signs, including a louder siren that should help to improve the current response time.