David Kirton’s live performance at the 2008 Royal Chelsea Flower Show produced more than vibes among the beautiful and exotic blooms it also secured a distribution deal with the United Kingdom’s # 1 music Distributor Nova Pinnacle. His award winning album Time for Change will be launched in the UK September 30th. 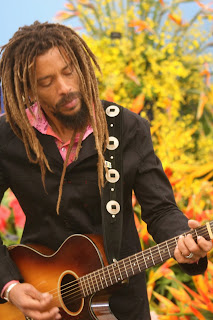 Kirton’s guitar driven hybrid of rock – pop and reggae moves past the reverent Caribbean rhythms of the past and on to the airwaves, dance floors and digital devices of future. It sits comfortably in i-pod play lists surrounded by Jack Johnson, Nora Jones, Sting, Bob Marley, Seal and Ben Harper.His music touches the heart, head and feet, making you feel, think and dance. Kirton pulled a hat trick at the 2008 Barbados Music Awards winning Reggae artist of Year, Reggae Song of Year (Green Camouflage) and Best video. He was also nominated for the coveted Entertainer of Year, which was won by another other multiple winner that night, pop super star Rihanna, who hails from Kirton’s breezy shores. Lead single for UK, ‘Free to Fly‘ speaks of change, hopes and dreams, while accepting and shaping personal realities. The majority of the Time for Change album was recorded at Slam City Studios in Barbados with the songs starting as acoustic organic versions from Kirton’s guitar. Production from Chris Allman and De Red Boyz added to the success of the sound. A trip to famed producer Salaam Remi’s studios in Miami for two tracks, including Free to Fly rounded out the recording. One of Kirton’s strengths is breaking barriers and creating links between art, screen and music. His style seems to attract creative celebrities and it is not uncommon to see actor Gary Dourdan (former CSI star), Barbados’s super models or a celebrated artist/ painter either on stage, playing an instrument or in a music video.

Dourdan, who looks like he could be Kirton’s brother, not only cameos as the entire band in the Free to Fly music video in an art filled studio but also drops a poetry rap on the Time for Change album. “By combining music and art, we find ourselves in a place where we’re free to explore thoughts and visions which are otherwise hidden inside our minds,” said David Kirton. “The two become one. Collaboration is natural when you find an artist that speaks your language – music is art and art is music.” David Kirton will be doing a series of interviews, live performances and promotional activities in London from Sept 30 – October 6th in support of the release.