After all of the blood they dragged from Asafa Powell and Usain “Lightning” Bolt, not to mention the effort expended in the 100/200/400m-Relays, is it really any surprise Bolt is now staving off the flu? Unfortunately, this means no bar of solid gold, as was promised in Switzerland –

Usain Bolt last night proved he is human after all. The Jamaican sprinter, who captured the sport’s accolades with his world-record performances at the Olympics in Beijing, charged to victory in the 100 metres at the Weltklasse grand prix in Zurich in 9.83 sec. By his standards it was a modest time. By any other standards it was a tremendous performance.

On this occasion the man who said he blew the world’s mind with his epic runs in Beijing was more concerned about blowing his nose. “As I am starting to get a cold, I was not able to think about any faster time,” he said. “It was a good track, a great crowd. My coach told me I should make sure to end the season healthy.”

Bolt follows his coach’s advice religiously – most of the time, but Glen Mills also thinks like Bajan Reporter that if Usain had not stopped to brag in that 100m that he could have done a better time, as it was, the 22 year old still gave the crowd their money’s worth –

Bolt did not make a great start – he was one of the last out of the blocks – but once he was into his rhythm he was not going to be beaten. Richard Thompson, of Trinidad & Tobago, who won silver in Beijing, was his closest challenger until the final 20m when Walter Dix, the Olympic bronze medallist, came through in 9.99. Thompson was third in 10.09, as Bolt ran under 10 seconds for the fourth time this year. 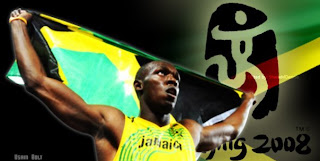 However, the fastest man ever need not feel too bad, his homeland still awaits to greet him with open arms –

On September 20, 2008 Jamaica’s National Meats in association with the community of Sherwood Content will present the Hart Hill Usain Bolt Homecoming Celebration. The event, a show of gratitude and admiration for triple Olympic gold medalist and native son, Usain Bolt, will be held in his hometown and will serve as Trelawny’s ode to Bolt’s amazing performance in the recently concluded Beijing Games in China.

The Hart Hill Usain Bolt Homecoming Celebration will commence with a fun day for the youth of the community at the Waldensia Primary School where Usain’s talent was discovered and nurtured. The tempo of the celebration will step up a notch with a concert boasting some of Jamaica’s top Gospel, Reggae & Dancehall acts on stage celebrating Usain’s great achievement.

The concert will be at no cost to patrons as full sponsorship of the event is being undertaken by National Meats/Hart Hill. David Phillips CEO of National Meats/Hart Hill voiced his pride in company’s involvement in the event, “We take rural development seriously and this is the reason we have joined with the community of Sherwood Content in this effort. Usain is an inspiration to all Jamaicans young and old and we felt that his achievements should be celebrated and heralded as a standard that we must all seek to attain.”

Phillips continued “The nation is caught up in the pride and confidence that Bolt has instilled in us since his emergence as our ambassador on the world stage. While he belongs to all Jamaicans he is first and foremost a son of the community of Sherwood Content. During the Olympics National Meats provided a big screen TV to the community so that we could all watch Usain make us 1proud and together shared in the joy of his victories; we also sponsored a motorcade and a celebration party after Usain won the 200m.”

The event will be organized by Mario Lazarre Jr CEO of No Joke Entertainment who is known for his professionalism and attention to detail. “I cannot express the honour we feel to have been asked by National Meats to produce the Hart Hill Usain Bolt Homecoming Celebration. To be a part of an Olympic Celebration honouring one of the greatest athletes we may ever see is beyond words,” stated the obviously overwhelmed producer.

Usain Bolt, the 22-year-old sprint star holds the 100m record when he stopped the clock at 9.69 seconds, the 200m at 19.30 seconds, as well as the 4 x 100m at 37.10 seconds, which he set along with his team mates at the just-concluded 2008 Summer Olympics. Bolt, who created history at the Beijing Olympics, holds the title of being the first man to win all male sprint events at the same Olympics since Carl Lewis accomplished the feat in 1984, and Usain is the only man to have set records in all three events at the same Olympiad.

The feat created a rippling effect throughout the world, especially in Jamaica where it sparked the pride of a nation as people from all walks of life came together to celebrate. Thus is the nature and greatness of the William Knibb graduate and cherished son of Sherwood Content. The community which nurtured him and has been behind him on all his record runs will celebrate his greatness in a grand affair on September 20, 2008.