HOW A MODERN-DAY ANDROCLES BECAME AN INTERNET VIDEO SENSATION

Truth sometimes beats fiction hands down – when Marcel Murell the other day gave me a a lavish intro at a book launch the other day, he probably cannot recall the play we were studying in 2nd form that he was referring to…

It was George Bernard Shaw’s version of Androcles & The Lion – now, in the original fable, Androcles was a runaway slave in the Roman Empire and while a fugitive he came across a lion who was wounded.

Rather than abandon the once-ferocious beast, he sought to see if he could help! A thorn had turned septic in one of the lion’s paws, so he made a poultice and drew out the offending matter and healed the mighty animal; as a reward, the lion did not eat him!

Soldiers caught Androcles, he was to be put to death for attempting escape – so he was sent to the Coliseum to be banded with then new Christians and be mauled by wild beasts… Guess who was released on Androcles? The massive engine of destruction – which did not even have to claw or bite, merely crush a man’s skull with a swat of his paws (now unfettered from nasty thorns) – instead lay at Androcles’ feet mewling like a kitten. Androcles, according to fable, was freed…

Thousands of years later, perhaps a descendant of that same lion was on sale at Harrod’s Department store in London (of all places) and two modern day Androcles thought the cub looked sad –

The decades-old footage of a full-grown lion joyously embracing two young men like an affectionate house cat has made myriad eyes misty since it recently landed on YouTube.

What is it about the old, grainy images that has attracted millions of clicks around the globe? Is it simply that a lion, whimsically named Christian, remembered the two men who raised it and then released it into the wild? It may be something more: the indelible image of a creature that could kill a man in seconds behaving like a pussycat with two men it obviously loves, smack in the middle of the African bush.

The video is the work of Anthony ?Ace? Bourke and John Rendall, two Australians who in 1969 were living in … London. Nearly 40 years later, Rendall expressed astonishment that one video of his reunion with his former pet had drawn more than six million hits as of this writing.

?Oh, my God,? Rendall exclaimed from Australia when told how popular the video has become. ?If it?s made people more aware and more interested in conservation and the protection of the environment, we?re very pleased.?

Back in ?69, Rendall was living on King?s Road, in the Chelsea section of London. The center of London?s counterculture at the time, King?s Road seethed with creativity and fashion.

When a friend came back from a trip to Harrods, London?s famous department store, and told a story about her trip to the pet department, Rendall was understandably fascinated.

So Rendall enlisted Bourke to go to Harrods with him. ?We thought we?d have a laugh at this,? Rendall said, ?and there were these beautiful lion cubs.?

The two cubs were in tiny cages in the exotic animals section. Like a kid enthralled with a puppy, Rendall instantly became smitten and determined to rescue one of them.

?I grew up in the bush in Australia,? he told TODAY. ?I was pretty shocked to see this animal, even if it was three months old, in this tiny cage: ?This isn?t right. We really have to do something about this.? And right there [we] decided to buy him.?

The notion that one could buy a lion and move it into an urban neighborhood seems preposterous today. But in 1969 London, the improbable was not impossible.

Bourke and Rendall did have to go through a long process to prove they could care for the animal, and there were others who wanted to buy the cub. But the two friends prevailed, and soon the basement of the custom furniture store where they worked had a new and exotic housecat.

In order for the cub to have enough growing space, he was raised at a vicarage’s grounds where he loved to play soccer of all things…. Anyhow, here’s the video –

To my mind, I do not think it is any accident that led to the cub being called Christian – for my part, that lion showed more humanity and Christ like devotion than many “beasts” which are legally deemed humans. That creature was shown such love and devotion that is probably permanently ingrained in him, even after a year in the alleged “wild.” 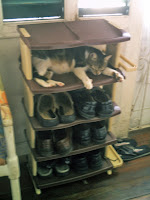 I can even think of how here in Barbados, one of my cats dotes on me after I helped it recover from a nasty attack from a so-called human 4 years ago; now he is so devoted he actually is annoyed if go out and yet so happy when I return home. Strangely, his name is Simon, as in the apostle Peter who was so dedicated to Jesus he walked on water without realising it and when the Crucifixion of Christ was near to hand, Peter sliced a soldier’s ear off in rage with the man’s own blade.

Now, please do not get me wrong, in no way do I think I can approach anywhere near the greatness of of that Son Of Man, nor do I look upon a humble little pet as a Disciple – I am merely stating that when names are given in many cases, based on their original definition or circumstance, they can be harbingers of what is to unfold?