Corrie Scott found a small dog on Spring Garden under a tree; he has a dark leather collar with silver studs with no ID. She says the pet is very sweet.

“Allowed me to go to him, pet it and pick him up. Unfortunately, he’s been hit by a car as he cannot walk on her back legs.” 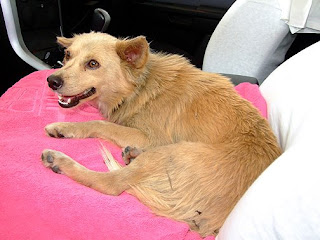 Corrie tried to take her to the RSPCA, but it was closed, so she’s got the pet with herself at the moment and fed & watered the poor lad. She wants to know if anybody might have an idea as who the creature may belong to.

“I will be taking him to vet tomorrow,” she adds.