BARACK TO THE FUTURE – SKITSOMANIA’S CREATOR DIRECTS ANOTHER ONLINE VIDEO

This 5-minute puppy is the 6th in our series of NOW Magazine movies, as we cover the T-dot beat with a comedic bent.

In this one, we stage a backstage showdown between Andre Arruda and Marty Adams, whose hilarious 18-inch character ‘Clive‘ chews up the scenery in the new Second City show ‘Barack to the Future‘. 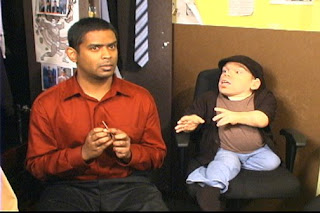 Feel free to forward the link, and/or email me your thoughts. Thanks to all involved, especially Andre & the cast at SC for giving up their afternoon to play with us.