The Socamixdown concept is by no means new to the music industry. For years pirates and deejays have taken the best songs and compiled mix tapes and CD’s and made them available for sale to the public. In most instances, the artistes, executive producers and producers have reaped little or no direct benefit from the sales. 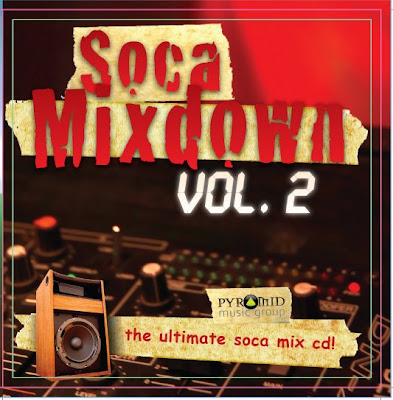 The Socamixdown CD is a true demonstration of industry players responding to the needs of the consumers and represents a new approach by the creators to the sale and distribution of their music in the changing global industry. Suitable for background music at parties, exercising at the gym or just easy listening this CD features some of the best groovy and ragga soca tracks for 2008.

The album features two collaborations from emerging female soca songstresses – Patrice Roberts and Keisha Christian. Patrice teams up with Adrian O’neale of the Fraud Squad on “Work Tonight” and Keisha Christian dabbles with a dancehall chant on an infectious soca beat with Peter Ram signing “One More Time.”

Alternative rock artist of the year, Philip 7 of the band Masala also features on the album with his first soca single “Bring de Wuk and Come“. Another groovy soca track heralds from former Trinidad and Tobago International Groovy soca monarch winner – Biggie Irie who pays tribute to carnival in his single “Carnival Again” Also featured on the album is well known producer Chris Alman of Slam City Studios who produced the Adrian Clarke single “All Night Party” and “When She Bounce” by William Watts.

The album is also home to two of Trinidad’s rising stars Umi Marcano and Keegan Taylor. Umi is the former Synergy TV Soca Stars 2007 and brings his R&B flavour to bear on both the Islander and Bad Boy rhythms with “Wuk Up Ya Waistline Now” and “Ya Getting De Feeling” which will set the stage for his 2008 releases for Trinidad Carnival.

Undisputedly one of the most consistent artistes in the Barbadian music industry is Adrian O’neale of the Fraud Squad. Best known for hits like Tek Dat and Yuk Wuk, Adrian penned the lyrical and witty pork lovers favourite – “Pork Mout” and continues to blaze up the airwaves with the Kernal Roberts penned “Burnin.”