Did you know Digicel is in Western Samoa, Tonga and Papua New Guinea? They’re also planning to go for Micronesia, the Marshall Islands, apart from Panama and Nicaragua too, so how does Bajan Reporter know? 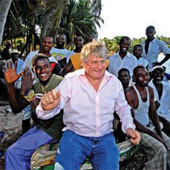 I’d like to thank an eagle-eyed member of the Barbados Film & Video Association for an update on one of the Caribbean’s most fascinating yet least known entrepreneurs, Denis O’Brien – founder of Digicel.

The detailed profile in the online edition of Forbes, it mentions how his father was Catholic and the mum Protestant and no member of either side showed for the marriage. He tried handling a radio station but that crashed despite success at getting ads for it, then in 1995 he turned his hand to mobile technology and almost six years later, sell it off at a massive profit –

Shortly after unloading Esat, O’Brien spotted a 3-inch-square ad in the Financial Times inviting bids for a mobile license in Jamaica. He likes to say he was drawn to the region because of all the Irish “troublemakers” banished there by the English after a 1649 invasion. But the real pull was that this was a country where only the elite had access to phones. In a place like that, he could get the masses to love him.

He paid $48 million for a license and rolled out a battle plan he would use on other invasions: spend lavishly on the network (1,000 towers in Jamaica), build clean stores with cheery staff (a rarity in many developing countries) and lure customers by offering new services like per-second billing and big discounts from the competition (80% less for phones and 50% less for calls).

The philosophy drove him to Haiti, where he had to ferry in diesel for generators via donkey, build towers THEN ask for permission …. yet luckily his agenda helped his business in unexpected ways, despite some kidnappings of top executives on Hispaniola –

In an April riot in Port-au-Prince, Haiti the mob not only spared Digicel stores from its burning and looting but even gathered in front of a few of them and cheered. Says a jubilant O’Brien, as he reads an e-mail on the news, “They’re calling us the Company of the People.”

If riots and coups aren’t risk enough, O’Brien is moving into El Salvador and Honduras to confront a rival with far more resources. Mexican mobile phone titan Carlos Slim Hel?, the second-richest man in the world, is already selling in those countries. “I don’t think about Slim every day,” says O’Brien, who claims he has taken 20% of the market in El Salvador in one year. (Slim, in turn, has bought a cell phone company in Jamaica, setting up a battle on O’Brien’s home turf.) O’Brien is also eyeing the U.S., where only 80% of the population has a cell phone. He says he could close the gap fast by selling cheap handsets activated with codes on prepaid phone cards, as he does in poor countries. “They’re snobbish,” he says of the U.S. operators’ disdain for such tactics.

O’Brien also owns a network of 42 radio stations in eight European countries, a golf resort community in Portugal, a plane lessor with a fleet of 93 in Dublin and a firm, just two years old, that runs Internet job-recruiting sites in six countries, including eight in China. 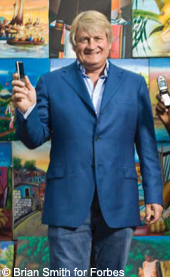 He’s got quixotic publishing ambitions, too. He keeps upping his stake (25% at last count) in Independent News & Media, controlled by a rival Irish billionaire, Anthony O’Reilly, whom he’s trying to oust.

Entrepreneurs use mobiles to work around the long delays, crumbling infrastructure and countless little Third World frustrations that cut into opportunities. Haitian merchant Jean Maurice Buteau exports 150,000 more mangoes a year now because his truck drivers can call when stranded on a rutted road with a broken axle or shot spring, and fruit rotting in the back. Samoan fisherman Finau Afitu earns $80 a week, four times his pre-Digicel pay, because he can check which markets want his fish by phone instead of walking to each one while they go bad. “My kids can buy lunch at school now,” he says.