The Digicel Sir Garfield Sobers International Schools Cricket Tournament drew to an exciting end today when two teams, comprising 22 of the best players from the 2008 tournament, had the opportunity to shine in an international All-Star friendly at the 3W?s Oval in Barbados.

The match began at 11:00 a.m. and was a highly anticipated clash of sporting events with ultimate winner Team B, including representatives from Barbados, Trinidad, Jamaica and the UK, beating Team A by four wickets.

Commenting on the All-Star match and the competition, Sir Garfield Sobers, founder of the schools tournament, expressed his delight at the standard of cricket throughout, ?I am really pleased with this year?s tournament, which saw intense competition of the highest standard. It is definitely growing from year to year with various new initiatives, including the Digicel Coaching Clinic and the Fun Day for the players. The All-Star match proved an exciting finale to a great tournament.?

Digicel Barbados Head of Marketing, Robert Chase, said, ?This year?s tournament had the highest ever level of participation throughout. Digicel is delighted to have partnered with Sir Garfield to provide this platform for our future stars of West Indies cricket.?

Director of the Tournament, Maurice Greenidge, described the match as ?…a fitting end to an exciting and competitive tournament, which showcased the cr?me de la cr?me of the 20 teams for one final cricketing display.? 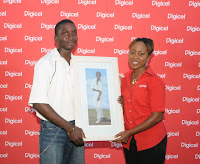 He added, ?In terms of the tournament, we have had close ones in the past, but this year?s was keenly contested, due mainly to the quality of the teams that participated. We are a hot-bed for West Indies cricket and this competition continues to be one of our better ones. The fantastic displays of talent are a promise of a bright future for West Indies cricket.?

In addition to the Digicel Sir Garfield Sobers International Schools Cricket Tournament, Digicel is committed to supporting the development of West Indies cricket throughout the region with a variety of initiatives including; the Digicel Cricket Coaching Clinics; the Digicel Scholarship Programme; and the recently concluded Digicel Home Series – to name but a few.