When D’Angel descended on stage at the 16th staging of Reggae Sumfest on July 17 fans were mesmerized. 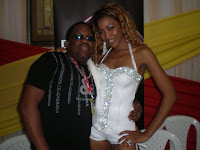 Mist engulfed the stage and in the midst of the darkness, decked out in a full white robe and angelic wings, D’ Angel gave the Sumfest fans all they expected and more.

D’Angel’s set symbolized the tremendous growth that the artiste has seen over the past year. She opened her Sumfest performance with Blaze and went through a well choreographed routine with her dancers. She then delved into Baby Father and even did a piece from Vybz Kartel’s verse. D’Angel’s set was energetic and the crowd participated throughout the entire performance. In the end she did her rendition of Stronger and left the stage more powerful than she entered.

“I am very happy that the fans at reggae Sumfest accepted me with open arms,” Recording Artiste, D’Angel cooed, “I did one of my best performances for the year and Sumfest and fans can expect bigger and better things from me as the summer party season continues“ 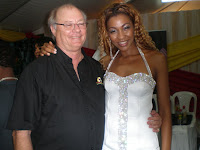 Sumfest was the next step in a series of great performances by D’Angel. Since that start of the summer she has graced the grand opening for the new hit Club Amazon in St. Elizabeth and performed to a crowd of over 25,000 at the 2008 staging of Portland Jerk Festival held at the Folly Estate, Port Antonio.

D’Angel’s next stop will be Beenie Man’s annual show, ‘Beenie Sizzle‘ (formerly called Beenie Summer Sizzle) to be held at Jamalco Sports Club in Clarendon on August 6, 2008. and the expectations are already growing!