Not so long ago, there was a catchword in Barbados that was almost abused – NISE as in Nat’l Initiative on Service Excellence – the word is as abused as its cousin. It is not mentioned too often now except for the Nation’s “Naughty or NISE” feature where businesses are supposedly examined… How effective is such a review if it’s tucked in the back away from advertisers’ over sensitive eyes?

I am not kidding as to how touchy Bajan merchants are – when there was no Cave Shepherd in Worthing and it was still the Vista Cinema, the British High Commission and Virgin Atlantic hosted a gala affair promoting Rover vehicles for the then new-James Bond flick “The World Is Not Enough” and Jomo Lord used to write for the Advocate (which has no search engine for its site, and was only recently partially updated – the last full site update was 20th May, but only News & Sports have been brought up to par, the Entertainment section is still at Odale’s Choice which was in March)…

He hated that Pierce Brosnan picture and the Vista yanked its advertising from that paper! Lo and behold – my mother, who worked at the Nation – also disliked the film except for the opening gambit… The Nation Classifieds chewed her out and said don’t she know she can affect revenue for the Corporation? She queried if she is to lie and they told her firmly to find another way to state her dissatisfaction (TRANSLATION – If you want to keep your job, then lie like a cheap rug, and fast)!

Of course, if the Vista pulled ads from the Nation then where can they go? But they huffed and puffed for measure and the Nation quaked like a good little cowed puppy.

That was not so far away, but here are a few experiences I have had, it will be interesting to see if I gain advertisers over time and change my perspective… Let’s go north yet head west – moving out to Holetown and the soon to be erstwhile Chefette there…

I was heading for an art show, and thought if the wife wanted some food when she came home and I didn’t feel like cooking, so I thought I’d let her try their Pork Ribs special –

“Um, you gotta wait seven minutes for that, sir?“ 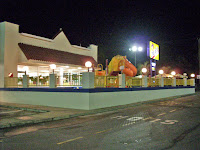 It was 6:15 and the exhibition concluded at 7:00 pm, so I skipped it until after the show, made my way back into the capital of St James and asked for the pork ribs, mind you… This is now 7:24 pm, and so I felt some should be in stock by now?

“Um, you gotta wait seven minutes for that, sir?“

“Wait, I left here at 6:15 and none was set aside for later? What kind of planning is that?” I snarled into a seething choopse.

It is not the cashier’s nor the server’s fault – but neither the cooks nor Management of that branch had the foresight to cook at least two sets of pork ribs on the possibility that at least that many customers MAY ask for it? Otherwise, why waste ads on tv and radio shouting for you to go and try them now! 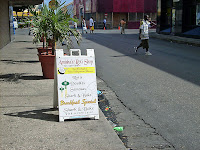 Thank God there’s a new roti place in the City, Amisha’s where a shrimp roti is 16 dollars but very filling and well flavoured, the wait for the roti was about 6 minutes so that is not too bad… In addition, there is a Chinese style restaurant there with real Oriental chefs – but we’re yet to try out that set of cuisine, so we’ll keep you posted!

Poor Ingrid Persaud, I just read her Notes From A Small Rock (she has an exhibition at the Museum right now until the 20th) and her delightful visit to Carter’s for picture hooks, it is all too true/sad/frequent here in Barbados. Her adventure was more like a service nightmare! 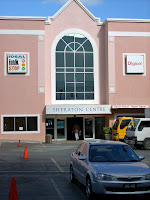 But I am begging any Bajan reading this on pain of death do not go to Simply Distinctive Dry Cleaners at Sheraton or any branch they may have!

It took 3 weeks to dry clean one jacket and 2 weeks-plus for my second jacket to be cleaned, this not including my wife’s dresses and her pants-suits… What were they doing? Making the chemicals? It appears it took my first jacket so long since I made the mistake of asking for them to repair a button on that item of clothing!

They charged me 13 dollars and change for one jacket, but no charge for the button-repair; my wife ended up paying nearly 43-dollars, for sloppy and incomplete cleaning! I asked her why did she pay, she replied she wanted no drama. Can we say “BIG, LONG CHOOPSE” right here?

All was not lost, however, at the Sheraton Repair Centre they were able to fix my Fossil that was botched at City Centre in Bridgetown. It took a week, but the repair was less than the 90 dollars asked for St Michael-side! These are the same folk who have old time DVD’s like B&W westerns for ten dollars each. 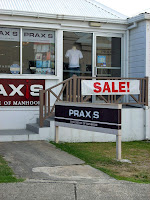 But the true case of genuine service excellence was in Hastings, Praxis had a 50% off sale at both the City and in Christ Church. I found some really nice Haggar slacks – stain resistant and all! But it was a medium khaki, I wanted two other colors – the lady called the Bridgetown branch and located a gray and dark-brown (almost black) and had them delivered to Hastings in 45 minutes!

Where do you think I’ll be visiting again soon? So it seems service excellence in Barbados is schizophrenic if not semi-comatose…