The world of Reggae always finds room for a great roots vocalist, and BE PREPARED, JAMELODY’s 15 track VP Records debut CD, showcases a rare voice—soulful, gritty, with echoes of Dennis Brown and Garnet Silk, as well as Stevie Wonder. But JAMELODY is clearly his own man, and he sings not just for one audience, but for the whole world.

Whether working out over BE PREPARED?s first half?hardcore foundation-style reggae tracks, produced by legendary mixing board master Bobby ?Digital? Dixon?or the CD?s ?New Roots? rock/pop/R&B hybrids, orchestrated by Carl James, this genre-busting talent is a sure shot for international stardom. 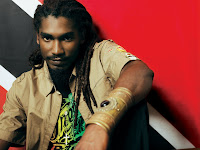 As everyone knows, Trinidad/Tobago is birthplace to soca/calypso?the music that motors the twin islands? Carnival, the most spectacular party on earth. Yet young Michael wasn?t feeling his native sounds. As a young teen, he and a few friends formed a capella group Brothers with Voices. Michael took the leads and arranged their covers of R&B favorites like Boys II Men, Take 6, Brian McKnight, and older groups like the Temptations.

Then Jamelody was introduced to Selassie I, which took his career into a special direction. JAMELODY began to sing solo reggae performances locally. After the positive reception from his native country, his manager Zakri Esau rushed him to record in Jamaica. Legendary Producer Bobby Digital instantly recognized JAMELODY?s perfect pitch, kamikaze energy, and golden boy appeal. VP signed JAMELODY and put the beguiling Digital-B-produced ?Give Thanks? on their Strictly the Best 38 compilation CD.

That tune, along with BE PREPARED’s title track, a roots-rocking hit-in-the-making that vibrates with JAMELODY?s serpentine vocal, announces to listeners exactly what this breakout talent is all about?a New Roots messenger blending classic reggae with contemporary R&B, rock, and pop in order to reinvigorate reggae?s vintage call for ?truth, rights, justice, and One Love.

Other classic reggae tunes like ?Ithiopia? and ?Pressure? mine rich Jamaican reggae themes about the sufferah?s plight and the yearning to leave island exile for return to Mother Africa.

On the New Roots tip, JAMELODY flexes on Carl James-produced tunes like ?All that I Pray For?; the rock-infused ?Since You?ve been Away?; the uptempo ?Joy?; and an original traditional gospel penned by Donald Lawrence, ?When the Saints Go to Worship.? ?Wanna be There,? written by JAMELODY, is a straight-no chaser R&B cut that bears a quintessentially JAMELODY reminder that each of us has our God-given place in life. And just to show he can do it, the CD contains a gorgeous Bobby Ditigal-produced cover of Stevie Wonder?s ?Living in the Sky? and a stunning revamp of Boys II Men’s ?It?s So Hard to Say Goodbye.?

As Bob sang, ?Who feels it knows it.? JAMELODY?s passion and knowledge clearly run deep and true.