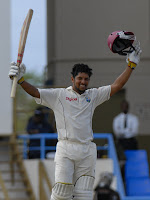 West Indies captain Ramnaresh Sarwan whose century led his team in saving the Second Digicel Test was at a loss for words to describe the batting performance of Man of the Match Shivnarine Chanderpaul who scored unbeaten knocks of 107 and 77 in the two innings he batted in the game.

“It’s very hard to find words to describe him. Over the last three years he has shown his consistency and he keeps better with age and it is really good for us as a team and hopefully we as batters can learn from him,” Sarwan said of his Guyana and West Indies team mate who scored a total of 184 runs without being dismissed in the match.

Sarwan, who himself made impressive contributions of 65 and 128 said that the plan on the last day, as they needed to survive the entire day to save the game, was to bat session by session.

“We had every opportunity to win a Test match today, obviously Ramnaresh and Shiv played very well in that partnership in the middle of the day that we couldn’t break, it was the difference between us winning and a draw,”

Ponting said at the post-match presentation ceremony where Chanderpaul was presented with his Digicel Man of the Match medal by West Indies Cricket Board president Dr. Julian Hunte.

The third and final Digicel Test of the three match Digicel Test Series commences on June 12th at the Kensington Oval in Barbados. West Indies captain Chris Gayle who is suffering from a groin injury which prevented him from playing in the First and Second Digicel Tests is expected to play in that game and return to his usual opening slot.

Chanderpaul who said after the game that he has a minor thigh strain is also expected to be fit and ready for that crucial game when the West Indies will be looking to level the series.

The West Indies players return to their respective home territories for a few days of rest after gruelling back to back Tests. They will regroup in Barbados next week for the Third Digicel Test while the Australians will travel to Barbados where they will have a short break with their family members who have travelled from Australia to be with them at one of the world’s premier tourist destinations.