Is Barbadian Entertainer Rihanna a modern-day Conan The Barbarian or Red Sonja? From sandalled teen to Queen of sprawling Empire?

“Know, O prince, that between the years when the oceans drank Atlantis and the gleaming cities, and in the years of the rise of the sons of Aryas, there was an Age undreamed of, when shining kingdoms lay spread across the world like blue mantles beneath the stars — Nemedia, Ophir, Brythunia, Hyperborea, Zamora with its dark-haired women and towers of spider-haunted mystery, Zingara with its chivalry, Koth that bordered on the pastoral lands of Shem, Stygia with its shadow-guarded tombs, Hyrkania whose riders wore steel and silk and gold. But the proudest kingdom was Aquilonia, reigning supreme in the dreaming west. Hither came Conan, the Cimmerian, black-haired, sullen-eyed, sword in hand, thief, reaver, slayer, with gigantic melancholies and gigantic mirth, to tread the jeweled thrones of the Earth under his sandaled feet.”

That was a mad Texan nearly 75 years ago, relating a saga roughly 9,925 years before then – it sounds a bit like all of the insanity that is NOW… Yet rather than a reaver, what of a Rihanna? What if rather than Conan the Barbarian, it was Conan the BARBADIAN? More accurately – Conan; the Barbadienne? As in Red Sonja or in nowadays, Rihanna…

Some folk almost worship her, she is Bajan so can do no wrong… Others link her to sorcery, even in this day and age, others still feel she was given a break at Combermere Secondary as this girl – who is barely in her 20’s now – could sing real pretty and through that talent seems to have had a full life, starting as a Fenty lass from the East Coast now commanding a music career, time as a model worth millions and also touting various technologies.

Even her outfits are not that far from the fictional swords-lady… Now, so much is happening in her life, she is in Canada on a tour with Kanye West, as we learn from Canoe –

On to R&B pop sweetheart, Rihanna, who hit the stage dressed in a black dress before ripping it off to reveal a skin-tight dance suit.

The young dance-pop star could have sold the ‘Dome out by herself, but this was no ordinary tour. 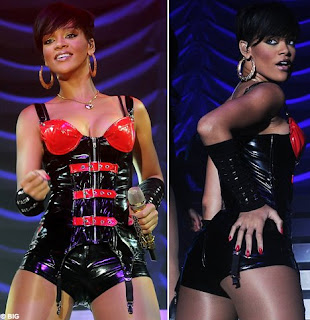 Rihanna finished and the stage was illuminated into a spectacle of glowing lights, sci-fi imagery and the climatic entry of Kanye West. Equipped with an orchestra, expansive stage setup and plethora of backup musicians West did what he does best: Put fans into a trance with his rhythm and playful performance. He’s got the chops to back up the bravado. It was a performance out of this world.

She wants to create Underwear to go with her Umbrellas, had a song go hyperspace from 53 to 1 in a week via technology, fighting off the likes of Usher –

Rihanna has retained the number one spot in the UK singles chart while Usher debuted at number one with his brand new album Here I Stand.

The Barbadian singer remains atop the singles chart for the second week running with her new single Take A Bow, with Manchester duo the Ting Tings in second.

Duffy climbs from seventh to third with Warwick Avenue – her album Rockferry remains at number two – and falls one place to fourth.

In the album chart, Usher followed the single success of Love In This Club by taking the number one spot after the first week on release of Here I Stand.

She wants to know love and this seems to be a problem for her keepers, an Asian tabloid has claimed – 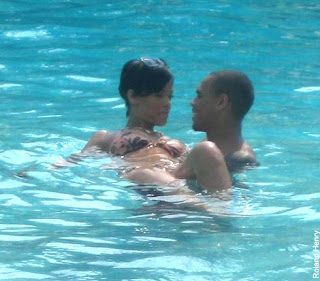 Barbadian singer Rihanna’s team has banned her from seeing her boyfriend Chris Brown.

The singer, who is busy promoting her new single Take a Bow, has an underwear project lined up at the side.

And her team believes that if she relaxes she would end up gaining weight… Brown on the other hand has doled out 100,000 dollars on a necklace for Rihanna, as revealed by jewellery designer Jason Arasheben.

Chris went for the heart theme. He said, Shes going to love this because she loves hearts, Arasheben said.

Apparently 20-year-old Rihanna was so impressed with the ruby and diamond necklace that she ordered a diamond-encrusted cross for 19-year-old Chris from the same jewellers.

It also seems she plans to strike back by indicating she’s a young fierce independent female, according to the same Thai-Indian journal…

The R&B singer had drawn up a wish list naming the musicians and producers she would like to work with when she next goes into the studio.

The names that were right at the top of the list were of Winehouse, Duffy, and Winehouse-collaborator Mark Ronson.

?I love Mark Ronson. We?ve talked about doing something together on my next album,? Contactmusic quoted her, as telling BBC.

She further added that she has always had a ?dream team? comprising of Brits Winehouse and Duffy.

“How amazing would that be? We?ve all got three different voices, it would be brilliant. Now that would be a feminist anthem,” she said.

This kind of attitude is rather very similar to that fictional bladed gal from Hyrkania ten millenia ago, no?