Irish band U2: New album coming – but no MP3 freebies

Paul McGuinness, the U2?s manager, announces that the new album – follow-up “How To Dismantle An Atomic Bomb” of 2004, is coming out by the end of the year. 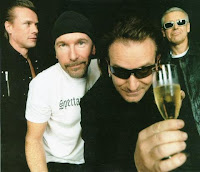 Speaking about the future projects of the Irish rock band, he says that they won?t guarantee the “free listening” of their songs like other famous singers made, and that the new album will come out in October, as expected.

Probably the question is related to the innovation that on official website of some popstars anyone can listen their entire songs.

For example, on some popstar website – like Rihanna, Justin Timberlake, Zedstar, etc. – there is an mp3 player where you can listen to a few songs of the artist.

On Kylie Minogue’s website you can view directly her music videos too, even if in a little window.

After this clarification, Paul McGuinness says that there will be some events in concomitance with the album?s coming out, but that the real sale of their CD?s represents for the U2 a large slice of their business so that they will go on his way. He also ensures that they will use all sorts of technology to make this coming out as interesting as possible.