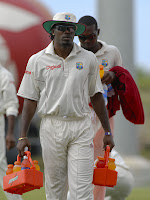 Ironically Marshall found himself in the West Indies final eleven for the Second Digicel Test against Australia at the Sir Vivian Richards Stadium because Gayle is injured and unable to play. Marshall scored 53 with eight stunning fours but fell late in the day to the left arm spin of Michael Clarke.

Gayle also said that Marshall is a changed young man who is more focussed and determined after having disciplinary challenges early in his career. At the end of the opening day Marshall was lavish in praise for the advice and guidance Gayle, the senior West Indies opening batsman offered him several months ago.

The opening batsman himself admits sound advice from the injured West Indies captain inspired him to work hard at the game. 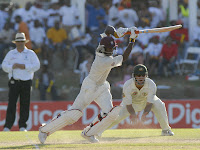 “A couple months back Chris (told) me that it is up to me to go out there and prove that I can do it, he told me to work hard and once I worked hard the runs will come,” Marshall told DigicelCricket.com shortly after the end of the first day’s play of the Second Digicel Test at the Sir Vivian Richards Stadium.

Ironically Marshall is playing in the game as a replacement for Gayle who was again forced to sit out with an ongoing injury.

He also confessed that he was surprised that he was recalled to the West Indies Test squad after being out for two and a half years since he played two Test matches against Sri Lanka in the summer of 2005.

A bigger surprise came when at the toss he was announced as the second West Indies opening batsman alongside Devon Smith. Marshall replaced the injured Ryan Hinds in the squad and fellow Jamaican right handed opener Brenton Parchment in the final eleven. 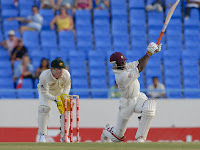 When asked what he thought was the reason for his surprising return to the squad the super talented 22 year old said that his performance in the Australia warm up game in Trelawny helped his cause.

In that game, playing for the Jamaica Select XI, Marshall, batting at number three, made 30 and 31 respectively. On both occasions he was the second highest top scorer but he suggested that during his performances he did not look intimidated by the Australian bowling attack. Parchment also played in that game, making 25 and 4 in the two innings.

Marshall also said that his three Carib Beer Series half centuries this season aided his cause but expressed disappointment at not getting any triple figure score as “hundreds count“.