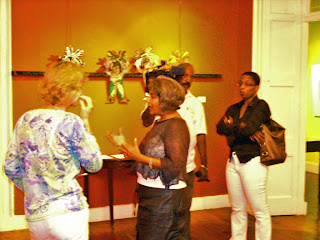 It’s been a while since we visited Lancaster House, this time they’re featuring an artist who uses her solar water heater as a kiln – drying coconut fronds or seed pods inside the cupboard where her heater resides for as long as 6 to 9 months… 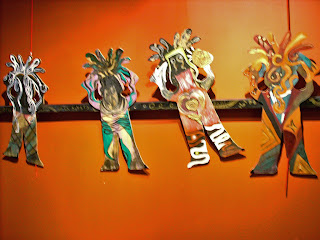 To me, some of Rafza Nehaul’s works are reminiscent either of Australia and/or somewhere near the Sandwich Islands. I came to such conclusions after recently visiting a private opening for her month-long show, folks like Jewel Forde and horticulturalist Anthony Hunte made courtesy calls to the exhibition – Rafza had good family support too, hubby and son in tow! 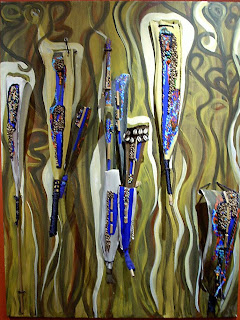 However, when I spoke with her she disagreed as to sources, by stating she was inspired with Peru’s Machu Picchu ruins and observing the works of the priests and privileged known as Inca, which European civilisation applied as a blanket characterisation to the whole race. 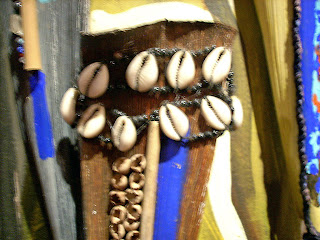 Not only history but cricket plays a part for a muse to Za as she is also known, there are whimsical caricatures like “Spectators” (celebrating famous witnesses to the many matches at Kensington) or intricately detailed bats in “The Wave” – a twin piece display known as a diptych; Za also has “New Moon Male” and “New Moon Female” or “Rain Spirit Awakens” which bear a resemblance to Polynesian art for myself. 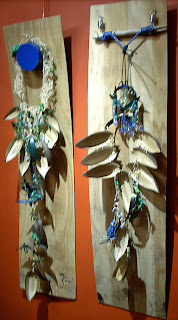 There was a hint of Australian dreamtime in her other cricket piece, “Keep Your Eye On The Ball” especially in the lower frond, what do you think? See below. 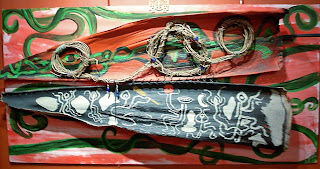 When you get the chance, go take a view as the exhibition runs until the end of June, also if you take a look at Lancaster’s website; it explains how these pieces are not overnight constructs and thus the pricing structure –

Over the past 5 years Rafza has had the time to produce only 5 or 6 pieces a year. Some of these have left the shores of Barbados others have been donated as fun raisers for charities and some have been private commissions. 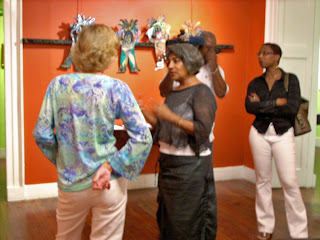 The creation of each piece, from the finding of the correct material, to conceptualisation takes several months, when all of this is in place; it is a matter of finding the time to carry out all of the above.

Rafza’s interests vary and are numerous, but her respect for animal and plant life has led her to her interpretation of her art. She uses ?TOSS AWAY? plant matter as her blank canvas or incorporates such material in her projects.

The cost for some works vary – from six-thousand to fourteen, this is art for a serious investor who perhaps upholds environmental causes, is Al Gore passing Barbados anytime soon? LOL!