Two more comments – one unfoundedly racial and the other laughingly as inaccurate as they accuse me of doing – HOWEVER; I still have some respect as these two chose to put their names where their objections are. For that, I salute you.

Plus? A call on my cell! I was asked if I deliberately script in an aggressive manner to generate hits, and try to excuse myself as a victim when cursing like other people I reviewed… But tell me, O spoken-wordist, when you attack the local political scene – are you ALSO not being aggressive?

These are the immediate repercussions of my OPINION piece on what happened with Le Mot Juste on June 8th.

It brings to mind the hypocrisy encountered by Will Thatcher, the late Heath Ledger’s character in “A Knight’s Tale” when as Sir Ulric he was revered as a hero of the jousting tourney, yet when Rufus Sewell’s villain has Will cast out as an impostor? Then the same crowd reviles him until the Prince of England knights Will as a Noble and the crowd reveres him once again!

When reviews are glowing and rosy pink how adored am I, yet woe betide should I dare to gainsay them, then I am a dangerous lying colonial brute, LOL!

EXCERPT #1: Caryn Rae submitted – Instead of continually stunting the growth of our country’s young talent with your vile retorts, I suggest that you find a more constructive hobby. As a community, we should be praising our youth who are doing great things; yet persons like yourself find time to criticize and to ‘pick‘ at the smallest of issues. Your colonial attitude is not surprising to a person from my generation. You prefer us to use the “Master’s language“, even for our personal pursuits.

REBUTTAL #1: Would this same community behave like June 8th if Senator Damien Griffith and Minister Esther Byer-Suckhoo were there, like February 16th? In essence, I should just shut up or praise that community, regardless? Who are you to presume I am colonial?

FACT #1: Circa 1992, Snow – a Canadian Dancehall-Rapper – was brought to Barbados for his hit “Informer,” and was hired by Rediffusion (That’s now Starcom Network). He forgot his lyrics and used vile profanity on stage, angry at the turn of affairs – the broadcast was cut IMMEDIATELY! The very next morning, General Manager Vic Fernandes (Who is now Starcom’s CEO) apologises to the entire nation forthwith and on behalf of the entire company… Fernandes vowed to NEVER reinvite the artiste again, this story made North American headlines since the Canadian had a #1 hit on Billboard with the song in question.

EXCERPT #2: Submitted by Selena Thompson – I have no problem with someone having a negative thought about any topic, even my own poetry, as long as there is sound reasoning for it, however, taking things out of context, mis-quoting and flaw hunting seem to be Mr. Bourne’s forte.

With the amount of lies and misleading statements that I have seen in his short comments, I wonder if there was any accuracy at all in the Evening News when he used to read it for CBC.

It seems that he has allowed his ignorance in the arena of spoken word and its performance world wide to cause him to believe that any form of “cussing“ is uncalled for when performing, when this, of all genres is one of the most liberal and includes all aspects of life as seen by the performer. It is ironic that he is allowed to say what he feels like, truth or not, but the ones with poetic license are supposed to fit into his definition of THIER genre. 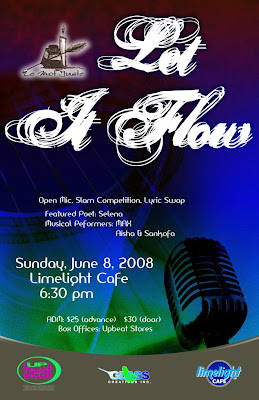 I heard Enricco Bohne advertise the show with words of caution, stating there would be full poetic license and that no minors were to be allowed to attend.

{Mad Cackles stifled} REBUTTAL #2: {Sniff, sniff – wipes away tears of pure glee} Holy Guacamole! Mama Mia, nobody ever told me there’d be days like these? Ok – enough, reverse order for response… {GUFFAW, ahem!} Take a look above at the notice I got from Enricco, it does NOT warn away kiddies, and while it does say, “Or, feel free to really express yourself… Let it all go with our Slam segment where you will of course be encouraged throughout and cheered on by our ever supportive family,“ nevertheless for me it did not convey a cuss-out?

If the show had full warning and ENFORCEMENT of that edict, I would not have said a word as I would know what to expect and treat it accordingly!

As for my ignorance of “spoken word“?? Then my humble suggestion is to look up Jack Kerouac, he is the pioneer of what is spoken word – as far as I can recall – his cussing was minimal; folks like beat-poet Alan Ginsberg and comedian Lenny Bruce make you all look like a convent, and I despise their works more than what happened the other night! Heru, while known to drop a word here and there, for the most part stays on the BEATen path…

But the real reason why I laughed in responding at you was your assumption of my control over content at Evening News when I was there – BWAHAHAHAHAHAAAH!!! Oops, I did it again… My dear, if you had any idea how a newsroom operates then you wouldn’t even have bothered to smear the egg that is all over your face due to your youthful ignorance. BTW: What does my size have to do with performance or critique? Your lack of adulthood is glaring, sweetie!

FACT #2a: What about Khalil Goodman’s review in the Barbados Advocate? It showed a more polite aspect of the evening, yet he still had this to say –

Dwayne Gibbs, aka Gibbzydan also of Azman shared the stage with actor Mathew Murrell in a verbal back and forth on Rawness. In some cases funny and in others rather depraved, their examples of how raw they could be were certainly not their best performance of the night, but it kept the gathering laughing.

It is not denied the audience laughed, they also did that at the guillotine during the Bastille and a similar crowd begged for Barabbas! But a show can be popular with an audience and critically panned – like the Gladiatorial Games of Roma, lo, those millennia gone by! Not even a triple apology – from producer of the Barbados Jazz Festival Gilbert Rowe, Gray’s road manager Tom Winch, and Gray herself – stopped Barbadians from asking yesterday why police did not intervene as they had done in the past when popular dub artistes used profanity, when she swore 16 times in less than five minutes Wednesday night.

In fact, so upset were some patrons with the conduct that immediately after the show Rowe said he was “extremely embarrassed and annoyed that [they] had to be subjected to less than proper behaviour“.

He noted that had he been there during the episode, he would not have hesitated to remove Gray from the stage.

Had it been a show at the Stadium where a dub or reggae artiste was performing, the plug would have been pulled and the show would have been over from the first utterance of profanity.

It is okay when certain things happen in the higher echelons of society that will not be tolerated in other parts? Why the double standard?

STATEMENT/CONCLUSION: While I refer to this online journal as a News-Blog, by no means is it to be viewed like Reuters, CNN or BBC… This is more of a place like that Daily Show from Jon Stewart, he calls it as he sees it and can be daringly irreverent, without profanity for the most part and usually bleeped if included.

I can cuss too, in pain or pleasure, but most times I know when and where… If a DVD of this show was handed to all respective families and workplaces, could you do so without blushing? Do you think TV8 would show this event RAW in “Eye On The Arts“? It seems my crime was saying a stripper turned a trick in a department store and stated what I thought about it, and that’s a crime, awwww!

Sad to say, it seems there is little difference between the fledgling community of Bajan spoken word performers and most politicians from the Caribbean or Zimbabwe – it appears most of you want only sweet nothings or “Hail and Well-Met, chap!” as your assessment, in other words? We all live in a democracy, so long as we speak the same language. Any diversion or questioning shows all the self-serving, thin-skinned immaturity that truly lurks in your hearts.

Those are my final comments on Le Mot Juste of June 8th!