Culture Advisor to the Nevis Island Administration (NIA) Mr. Halsted ?Sooty? Byron has cited that the introduction of African Drumming in schools was responsible for the heightened interest in drumming and the craze for iron bands among Nevis? youth.

Mr. Byron told the Department of Information in a recent interview that when drumming was introduced in primary schools as an initiative of the Department of Culture while he served as Director some years ago, the numbers were slight but there had been a spiked interest in recent times.

?Drumming in schools has caught on. When we started first the numbers were very small but up to when I finished dealing with that aspect of the art form in the schools, I think it was going very great.

?We [Department of Culture now the Nevis Cultural Foundation] have now recruited a young man who is also a member of I-Afrikana Drummers Keoma George and the young boys and girls in the schools have really taken to it to the extent where we see these iron bands forming all over Nevis. This is a direct spin off from the drums,? he said.

Mr. Byron explained that it was regrettable that parents and adults did not think that an African drum could not make a perfect gift for a young adult or child.

?It is unfortunate that our parents and adults don?t think of buying a drum as a gift for a young man or a young boy or girl and so a lot of the young boys are not able to buy the expensive drum which cost over $600 and so they have taken to the pans and pots and all the car rims and so on but that is a direct spin off of what has happened in the schools as far as drumming is concerned,? he said. 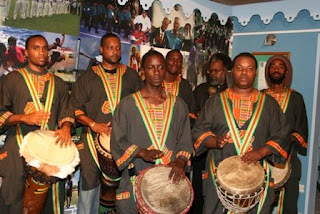 Notwithstanding, the Culture Advisor noted that although the island?s only African Drumming group had planned to keep the interest in drums alive and would soon form a youth drum core to encourage more young people.

He also advised parents, guardians and community members that there was the need to recognize when young people were talented and should do all they could to ensure they owned an African drum.